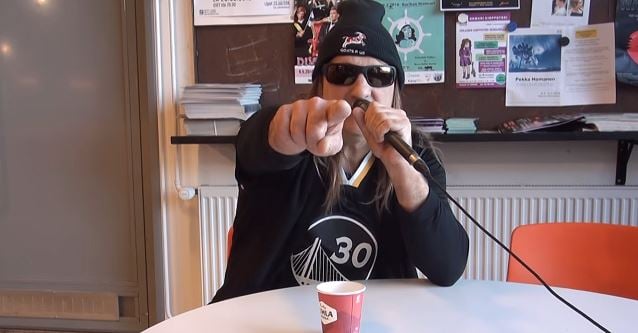 Finland's Kaaos TV conducted an interview with drummer Tom Hunting of San Francisco Bay Area thrashers EXODUS prior to the band's March 18 performance at Rytmikorjaamo in Seinäjoki, Finland. You can now watch the chat below.

Asked if there are any plans for EXODUS to work on material for the follow-up to 2014's "Blood In Blood Out" album, Hunting said: "Gary [Holt, EXODUS guitarist and main songwriter] and I are gonna start sitting down… He's gonna write some riffs and we're gonna start jamming in April. We're not under any hurry or any kind of time constraints to come up with a new record, but we want to. Everybody's motivated, and we have a little free time in April. 'Cause we've been touring constantly for this album, and Gary's got commitments to SLAYER too, so we've gotta work around that. He's a big part of this thing."

Holt has been the touring guitarist for SLAYER since January 2011 when Jeff Hanneman contracted necrotizing fasciitis, also known as flesh-eating disease, from a spider bite in his backyard. Hanneman eventually died in May 2013 from alcohol-related cirrhosis of the liver.

Holt is unable to take part in EXODUS's current European trek due to his commitments with SLAYER. Filling in for him once again is HEATHEN guitarist Kragen Lum.

"Blood In Blood Out" sold around 8,800 copies in the United States in its first week of release to debut at position No. 38 on The Billboard 200 chart. Released in North America on October 14, 2014 via Nuclear Blast, the CD art was illustrated by Swedish artist Pär Olofsson, known worldwide for his incredible renderings that have graced the covers of countless heavy metal albums, including EXODUS' "Let There Be Blood".

"Blood In Blood Out" was EXODUS' first album since the departure of the band's lead singer of nine years, Rob Dukes, and the return of Steve "Zetro" Souza, who previously fronted EXODUS from 1986 to 1993 and from 2002 to 2004. 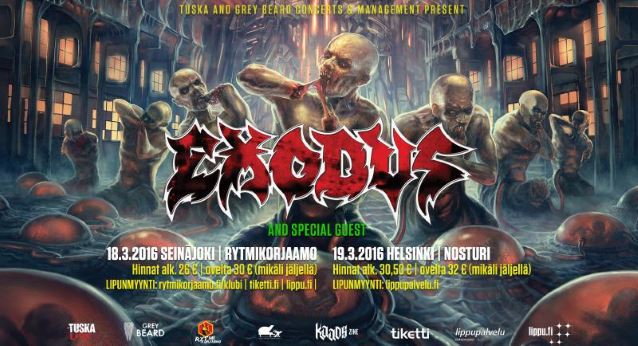