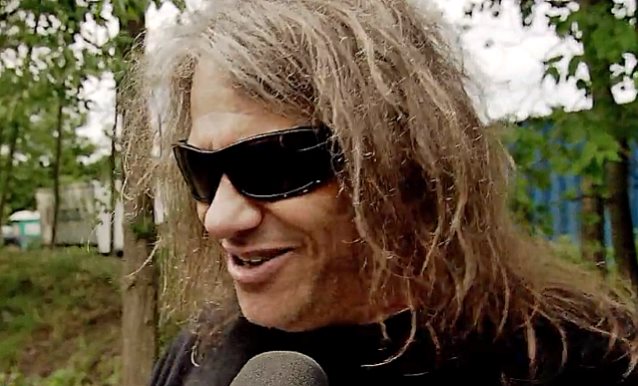 EXODUS frontman Steve "Zetro" Souza was interviewed by Conny Schiffbauer of WDR's "Rockpalast" at this year's edition of the Rock Hard Festival, which was held June 2-4 in Gelsenkirchen, Germany. You can now watch the chat at WDR.de.

Speaking about his much cleaner lifestyle today compared to his heavy drinking and drugging days nearly three decades ago, Zetro said: "I wanna last. I wanna keep doing this for as long as I can. Over the last year or so, we've lost so many great people — Lemmy especially — so I wanna try to surpass that age and surpass that music and be able to play music longer, so I'm very focused on that as well."

When asked about the current relationship between the members of EXODUS and whether they hang out with each other during their time away from the band, Zetro said: "We don't really see each other on our free time, to be honest with you. In fact, none of us… We haven't for years, but I think the relationship in the band is the best it's been now in a long time. Because when I wasn't in the band, there was a lot of what we like to call mudslinging that went back and forth, and a lot of that was just, 'You're my brother. I've been with you for all these years, and you hurt me, so I'm pissed off at you.' So I think that that's all passed. And we're all very focused on what we need to do. And so there's never any arguments anymore. I refuse to raise my voice, I guess. So it's a lot easier working in that atmosphere, for sure."

EXODUS's latest release, "Blood In Blood Out", was the band's first album since the departure of the group's lead singer of nine years, Rob Dukes, and the return of Souza, who previously fronted EXODUS from 1986 to 1993 and from 2002 to 2004.

EXODUS drummer Tom Hunting told the "Mike James Rock Show" at this year's Download that the band has "five or six" new songs structured so far for the follow-up to "Blood In Blood Out", as well as "bits and pieces" of the remaining few tracks that will appear on the forthcoming disc.

Souza told Metal Wani that EXODUS would likely enter the studio in late October or early November to begin recording its new disc for an early 2018 release.