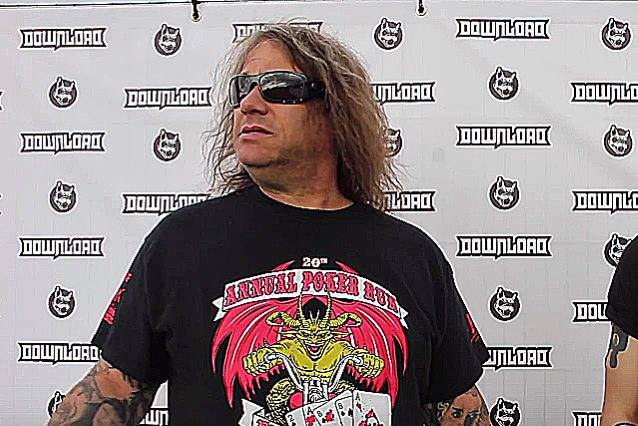 EXODUS singer Steve "Zetro" Souza was interviewed by TheMetalTris at at this past weekend's Download festival in the U.K. You can now watch the chat below.

Speaking about the progress of the songwriting sessions for the band's follow-up to 2014's "Blood In Blood Out" album, Zetro said: "Gary's [Holt, EXODUS guitarist] been home from SLAYER duties, so he's been writing a lot of what we're gonna start recording at the end of the year. We'll be ready by November."

Zetro also talked in more details about the EXODUS songwriting process, explaining: "Gary and Tom [Hunting, drums] get together and they get into a room and they basically get a structure of the song together. When it's ready, [Gary tells me], 'I'm gonna write this one lyrically,' or, 'I want you to do this one.' 'This is where the verse goes,' 'This is where the chorus goes,' or, 'Do you have an idea for this?' or something like that. Kind of like Legos — you kind of put 'em together and you build 'em all together, and after you get to the top, you've got yourself a Lego pyramid. That's kind of how we do it."

Hunting told the "Mike James Rock Show" at this year's Download that EXODUS has "five or six" new songs structured so far, as well as "bits and pieces" of the remaining few tracks that will appear on the forthcoming disc.

"Blood In Blood Out" was EXODUS's first album since the departure of the band's lead singer of nine years, Rob Dukes, and the return of Souza, who previously fronted EXODUS from 1986 to 1993 and from 2002 to 2004.

Holt has been the touring guitarist for SLAYER since January 2011 when that band's co-founding guitarist Jeff Hanneman contracted necrotizing fasciitis, also known as flesh-eating disease, from a spider bite in his backyard. Hanneman eventually died in May 2013 from alcohol-related cirrhosis of the liver.

When Holt is unable to take part in EXODUS touring activities due to his commitments with SLAYER, he is being replaced by HEATHEN guitarist Kragen Lum.