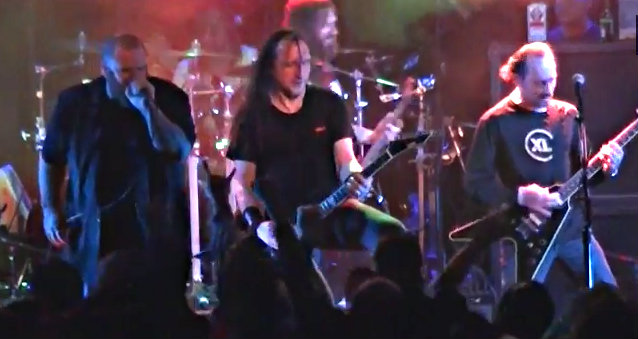 San Francisco Bay Area thrashers EXODUS were rejoined by guitarist Rick Hunolt on stage this past Friday, December 20 at Slim's in San Francisco to perform two songs: "The Toxic Waltz" and "Strike Of The Beast". Multi-camera video footage of the "The Toxic Waltz" performance can be seen below (courtesy of Capital Chaos TV).

In other news, EXODUS has been added to the list of bands who will perform at METALLICA guitarist Kirk Hammett's first annual horror convention, dubbed Kirk Von Hammett's Fear FestEviL, which will take place February 6-8, 2014 at The Regency Ballroom in San Francisco, California. Also scheduled to appear are DEATH ANGEL, ORCHID and CARCASS.

Visit www.FEARFESTEviL.com for the latest information on horror's newest and coolest fan convention.

With Gary Holt still handling guitar duties for Jeff Hanneman on SLAYER's North American and European tours, EXODUS invited none other than Hunolt to fill in for the band's shows in 2012 and beyond.

Longtime EXODUS fans will recall that Hunolt — the other half of the famed EXODUS "H-Team" who is on every studio recording from 1985 through 2004 and co-wrote some of the band's best-known songs such as "A Lesson In Violence" and "Deliver Us To Evil" — left EXODUS after the band's highly-acclaimed 2004 reunion album, "Tempo Of The Damned". "Murder In The Front Row", the photo book documenting the pinnacle of the Bay Area thrash scene, aptly documents Hunolt's tenure in the band.

Hunolt first rejoined his former bandmates at a special concert in celebration of Holt and Lisa Perticone's wedding on September 24, 2011 at Avalon in Santa Clara, California. He also performed with them at "Bonded By Baloff: A Decade Of Remembrance", a special concert which marked the 10-year anniversary of former EXODUS singer Paul Baloff's passing. The event took place February 4, 2012 at the Oakland Metro Operahouse in Oakland, California.