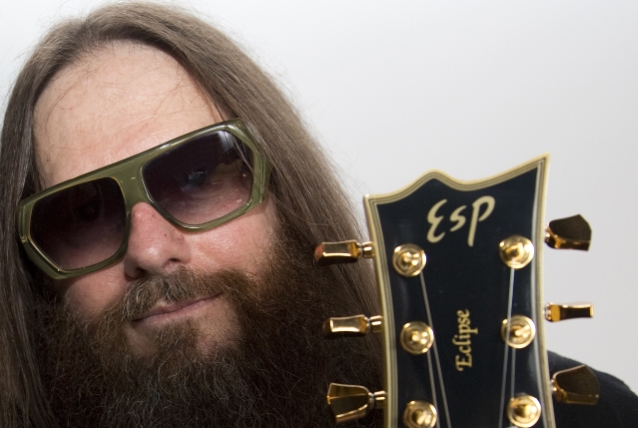 In a recent interview with Loudwire's "Gear Factor", EXODUS guitarist Gary Holt offered an update on the progress of the songwriting sessions for the band's follow-up to 2014's "Blood In Blood Out" album. "I've been writing new EXODUS material for, like, months now — for, like, close to a year now — and we've got a massive fucking catalog of riffs and songs," he said (see video below). "And [EXODUS drummer] Tom Hunting and I are just getting together when I'm home and we're just working on new stuff and taking our time. We're not in any hurry. We're gonna make sure it's a fucking earthshaking moment when the album's done."

Although it was originally reported that the veteran San Francisco Bay Area thrashers would go into the studio in October 2017 to work on the new effort, the band will now not begin tracking the next disc until Holt is done playing with SLAYER as part of that band's "final" world tour.

"Blood In Blood Out" was EXODUS's first album since the departure of the group's lead singer of nine years, Rob Dukes, and the return of Steve "Zetro" Souza, who previously fronted EXODUS from 1986 to 1993 and from 2002 to 2004.

Holt spoke in a 2017 interview about the musical direction of EXODUS's next disc. He said: "Of the stuff I've written so far, I think the songs are shorter, but I think they're also at the same time more progressive than the last album. It's a little outside the box. It's really super crushing, but I think people will be surprised."