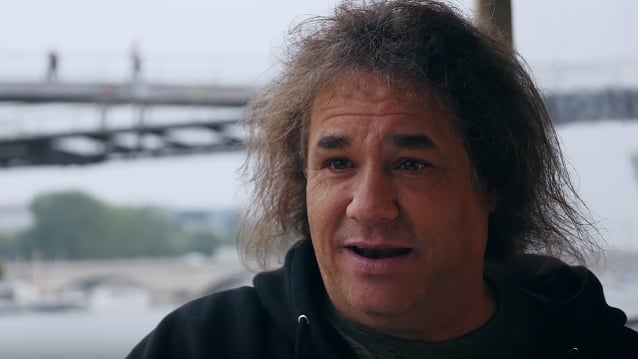 EXODUS singer Steve "Zetro" Souza has bemoaned the lack of new bands who can take over as festival headliners once all of heavy metal and hard rock's current top draws have retired.

Speaking to France's Duke TV, Souza said (see video below): "There's no more Ozzy Osbournes anymore; there's no more BLACK SABBATHs anymore — they're gone. Where's the iconic bands that initially came out with the sounds that you love?

"A lot of fans come up to me, and since SLAYER has announced that this is their last tour and they won't be continuing on… Glenn Tipton isn't playing with JUDAS PRIEST anymore — he actually does; he plays three songs in the set. And look, we lost Lemmy a couple of years ago, so MOTÖRHEAD's done. A lot of things can happen.

"I've never really seen any band that really impresses me that looks like they're gonna be a JUDAS PRIEST or an IRON MAIDEN — that size of band — and be able to carry on for 40 years with that same push and all the same people and building more fans," he added. "[I'll] be curious to see what happens."

Souza is now on his third stint with EXODUS, having previously fronted the band from 1986 to 1993 and 2002 to 2004. A decade following his second departure, Souza returned to the fold in 2014, just in time to appear on the group's latest album, "Blood In Blood Out".

Souza has said in recent interviews that EXODUS will wait for guitarist Gary Holt to complete his touring activities with SLAYER before they officially begin work on the follow-up to "Blood In Blood Out".