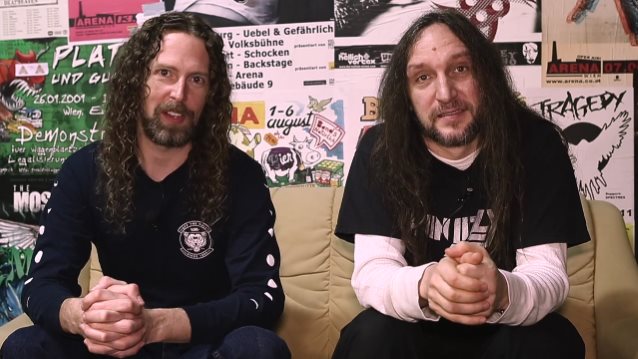 Guitar Mania conducted an interview with guitarist Lee Altus and fill-in guitarist Kragen Lum (both also of HEATHEN) of San Francisco Bay Area thrash metal veterans EXODUS prior to the band's November 18, 2016 show at Arena in Vienna, Austria as part of the "Battle Of The Bays" tour with OBITUARY, PRONG and KING PARROT. You can watch the full chat below. A few excerpts follow (transcribed by BLABBERMOUTH.NET).

On filling in for founding member/guitarist Gary Holt while he is on tour with SLAYER:

Kragen: "My job with EXODUS is to capture the feel of what Gary does so that when the audience is there, if they close their eyes, they hear EXODUS and it sounds the same."

On his preparation for the EXODUS gig:

Kragen: "There were some parts where I couldn't tell or I may have missed a note or something like that, and I'll sit down and Lee would show me, or even Gary would show me. He showed me some stuff. Most of it, I did my homework. The same with the guitar solos. I just sat and listened. My style is a little bit different from Gary's, but I essentially just play my version of what he played on the record for the most part. There are a couple of solos where I do my own thing. Mostly, it's just trying to capture the feel of it so that people hear what is on the album."

On Lee's playing and writing style:

Lee: "For the riffs, you really don't think. You could be jamming riffs and come up with 110 of them that you think is okay, like there's something there you could build a song around. You don't really think about it. It comes naturally from the influences of when you are learning guitar, it compiles into your style, and then you don't think about it. It just comes out how it comes out. I was lucky enough when I moved to the Bay Area at the time when it was all happening. Everybody around me had that [playing style]. I watched EXODUS and METALLICA, it was a new way of playing things, like the palm-muting technique. I would just sit at home and practice it. That's why people ask, 'How do you develop the Bay Area style?' I don't think you can develop it. If you happen to be there at that place, it comes natural. I'm sure all the grunge guys from Seattle, they didn't just develop it in a special way. It came natural over there; something was going on there. At the same, that was the Bay Area style, and I picked up on it and didn't even think about it. I just copied whatever anybody else was playing around me, this new style and developed it into my own."

On the status of the next EXODUS album:

Lee: "It's in [the] talking, not making [phase]. As strange as it sounds, at this point, the HEATHEN album is more in the making than talking about [it], even though HEATHEN puts out an album every ten years."

On the status of the next HEATHEN album:

On the direction of metal music in the States:

Lee: "I couldn't tell you. Whatever the younger bands, I'm so unaware of that. That's where I admit I feel so old. There's all these younger bands or whatever they call the 'hatecores,' I don't know even know the name of the styles anymore. I'm so clueless. I go home and I'm a family man. I don't go out and I'm not aware of any of that anymore."

Kragen: "I listen to everything. I get music constantly because I want to know what's out there. I guess I see a lot of bands experimenting with being more technical, or, more aggressive. They're focused on all these different things except one important part, which is the song. That's the part that kinda bums me out. I really like the sound and I really like some of the aggressiveness or the brutality, or whatever you might call it. But, it's seems like the song is lost. All the djent stuff, they are fantastic musicians, all great, but there's not a lot to grab onto as a whole. There might be a part that is really catchy, but I think that's lost. For me, personally, that's what I enjoy the most in terms of writing. I enjoy writing a song. The stuff I've written for the new HEATHEN is all song-oriented. It's not even all long, 10-minute songs, or anything. It's more about a concise memorable song, but keeping the sound how it should be."

On why EXODUS has remained together for so long:

Kragen: "With EXODUS, it's like a family in a way, even including me, they treat me like family. I think that's the difference. There are two types of bands: there are bands who are family that want to stick together and work out their problems; then there are the other ones where one guy is driving the project and hires musicians, and fires musicians. As far as playing music in general, I did go to college. I was a video game producer for years. I got into this late in life. I was always a musician, always had bands, but sometimes it is the opportunity. The opportunity hit me right at the right time. It's just being patient and being persistent if you want to do it."

EXODUS's latest album, "Blood In Blood Out", was the band's first effort since the departure of the group's lead singer of nine years, Rob Dukes, and the return of Steve "Zetro" Souza, who previously fronted EXODUS from 1986 to 1993 and from 2002 to 2004. 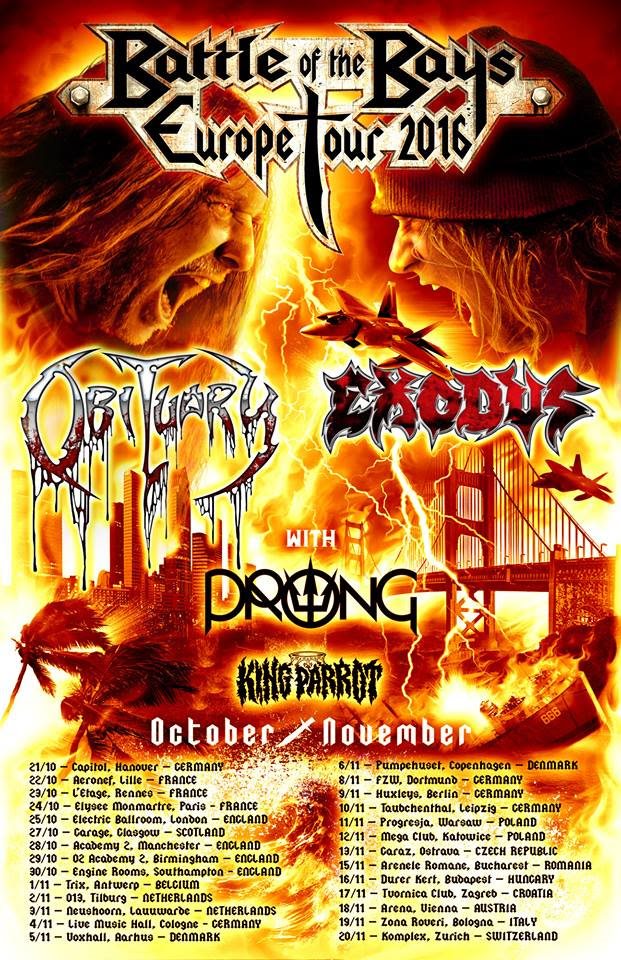