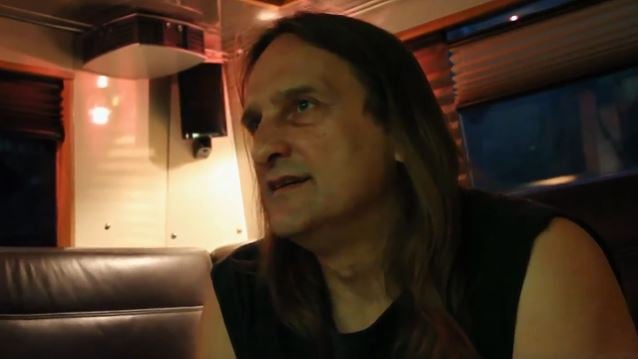 On how the recording process for 2014's "Blood In Blood Out" was different from the way previous EXODUS records were made:

"Well, yeah, we changed singers in the middle of the record, so.. Yeah, we were ninety-five percent done with vocals with [former EXODUS singer] Rob [Dukes], and Zet [previous EXODUS singer Steve 'Zetro' Souza] came in and sang on a few tracks. We just originally wanted to see how it sounded, and we were, like, 'That sounds like a voice that should be on this record.' The recording process pretty much went the same. We jam everything out before we even hit the studio. It's a very organic process. It's guitars and drums jamming in a room. Gary [Holt, guitar] comes up with a riff, or Lee [Altus, guitar], and they'll feed it to me, and then I put the drum beats to it. Nothing really crazy that we do to write music. And then we do the drums in a proper studio with room mics and a big-ass board. And then we tear everything down and go to Pro Tools and then take it to some remote location somewhere. It's kind of like camping and working at the same time, 'cause everybody will work in shifts. Like, if Gary's doing rhythms and he gets tired, Lee will come in and put down a lead or whatever. It's a fun process. I like the recording process. We did all the tracking at my house except for the drums. I live on a ranch in the East Bay Area. And it's a pretty easy, seamless process. And then the guys just come in when they're ready to work, and we just kind of get it done that way. We don't really put a deadline. We put a timeline we'd like to get done at. I mean, we've been at this awhile now, so the process goes pretty quick. And we don't put anything to tape 'till [all the music is] there."

"Kirk [Hammett, former EXODUS and current METALLICA guitarist] actually met him somewhere, and he came back to us… 'Cause I had been doing most of the singing; I was, like, singing and playing drums. And we always wanted a frontman. We brought various people in through the fold, and none of them could really sing that good. And I met Paul at a show in Berkeley, California, and we instantly liked each other. He was super fun to be around. And his passion for this music was, like… He loved metal more than any of us ever could… than anybody I've ever met, probably."

On whether Baloff was still in EXODUS when he died in 2002:

"Yeah. And we were making plans… I mean, that was a rough time for us, 'cause we weren't really a good-functioning band at that time. We all had some drug problems going on, or most of us, anyway — myself included. And Paul had two strokes. And we knew something was going on with Paul, but we never realized that he'd had a stroke until he had the big stroke that killed him. And we got an education about strokes right then. But even his dying break our will to do drugs. It took awhile. Gary did it first… you know, he got sober first, and I soon followed, and the rest is history. We haven't touched the shit ever since then. I mean, there's a pretty cliché saying: you get to a point where you're a musician dabbling in drugs, and then you become a drug addict that's dabbling in music. And that's kind of where we were. We thought we were doing stuff, but we weren't really progressing. We were just kind of spinning the wheels."

EXODUS is currently touring North America as the support act for KING DIAMOND.

Holt is unable to take part in the trek due to his commitments with SLAYER. Filling in for him once again is HEATHEN guitarist Kragen Lum.