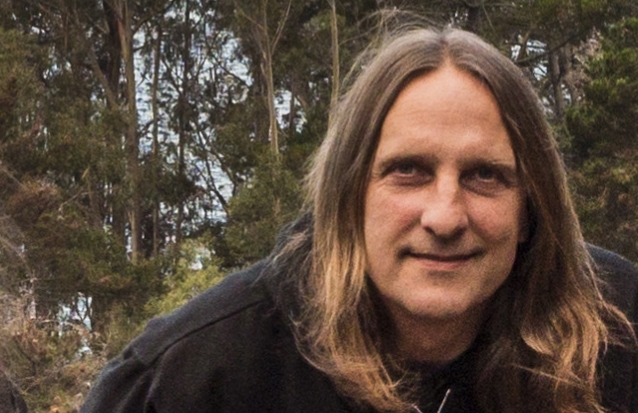 In a brand new interview with Metal Underground, EXODUS drummer Tom Hunting offered an update on the progress of the songwriting sessions for the band's follow-up to 2014's "Blood In Blood Out" album. "Me and Gary [Holt, guitar] have jammed, and there's the makings of four great songs," he said (see video below). "I don't even know if we'll use that, because my last meeting with him… I went to his house and heard some of the riffage he's working on now, and I'm, like, that might be better than the four that we're working on. So we might piecemeal some of [those] riffs into different songs. But it's gonna be great. I think he's itching to get back into the creative process, because SLAYER doesn't use him to write riffs; they just kind of use him to shred live and play that stuff. But we're excited. He's got a long break coming up. He's dealing with some family things right now, and I think by the time we get home from this, we'll probably both need a creative outlet, somewhere to just [vent]. So I think we'll get some work done. I don't know when we'll actually be recording. We'll have to work around both bands' schedules, 'cause we continue working while he's with SLAYER too."

Hunting went on to say that, unlike SLAYER, EXODUS has no plans to retire anytime soon. "We've had lulls and breaks throughout our career, spanning now almost forty years," he explained. "But we're not quite ready to stop yet, I don't think. But as far as the records [go], we'll take it one record at a time. I can't say there'll be five more albums or whatever, but we'll see how it goes. Right now we're having fun, and if we're having fun, and we still enjoy the process… Touring's a lot more fun, I think, in these times than it was… When I was 20, it was more about the party, and now it's more about the journey and having a really good live show and stuff like that."

Gary missed the last four shows of SLAYER's just-completed European tour in order to return home and be with his dying father. He was temporarily replaced by ex-MACHINE HEAD guitarist Phil Demmel.

"Blood In Blood Out" was EXODUS's first album since the departure of the group's lead singer of nine years, Rob Dukes, and the return of Steve "Zetro" Souza, who previously fronted EXODUS from 1986 to 1993 and from 2002 to 2004.

Holt spoke in a 2017 interview about the musical direction of EXODUS's next disc. He said: "Of the stuff I've written so far, I think the songs are shorter, but I think they're also at the same time more progressive than the last album. It's a little outside the box. It's really super crushing, but I think people will be surprised."