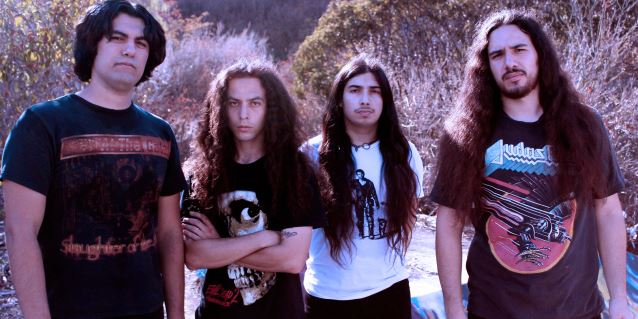 Southern California quartet EXMORTUS — whose invigorating twin-guitar mix of neoclassical shred, Bay Area thrash, progressive death and traditional heavy metal has earned the group a devoted following in the Western U.S. — has signed a worldwide contract with Prosthetic Records. The group's third album will be released in February 2014 to coincide with the band's North American tour with DARK TRANQUILLITY and OMNIUM GATHERUM. Prior to that, EXMORTUS will team with San Francisco thrashers HATCHET for the "Death Upon The West" tour, which kicks off in Fullerton, California on November 2.

"We're very excited and proud to announce our signing with Prosthetic Records," the band says in a statement. "The staff there is great and very enthusiastic. They've signed so many great bands over the years and continue to do so, some in which have even given us some influence. Being fans of the label and their artists, it just feels like a perfect fit. We can't for wait Prosthetic to put this next record out!"

Co-founded a decade ago by then-teenage cousins Conan (vocals/guitar) and Mario Moreno (drums), EXMORTUS released several demos and EPs independently before signing with Heavy Artillery Records in 2007. The group's 2008 debut, "In Hatred's Flame", and 2011 follow-up, "Beyond The Fall Of Time", earned praise for their "frighteningly aggressive thrash blended with both death metal and NWOBHM bluster," and their exuberant, shred-heavy live performances can convert even the most jaded heshers into enthusiastic headbangers.