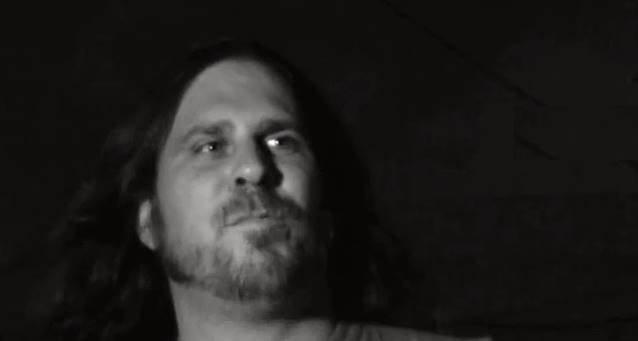 The Age Of Metal conducted an interview with Matt Harvey of West Coast horror hellions EXHUMED on October 7 at The Orpheum in Tampa, Florida. You can now watch the chat below.

EXHUMED's latest album, "Necrocacy", was released in August via Relapse Records. The effort was made available in CD, LP, deluxe LP and digital formats. The limited-edition "Necrocracy Party 2013 Political Rally Pack" contains a deluxe LP plus a bonus CD with the entire album plus five exclusive tracks, a pin set, bumper sticker and poster pack, limited to a one-time pressing of 500 copies worldwide.

The video for the song "Coins Upon The Eyes" can be seen below.

EXHUMED is taking part in a mega North American tour, supporting headliners DYING FETUS. The onstage battery commenced on October 4 in Wilmington, Delaware and will devour nearly a month's worth of cities, coming to a close on November 2 in Springfield, Virginia. Additional support is being provided by DEVOURMENT, WAKING THE CADAVER, ABIOTIC and RIVERS OF NIHIL.