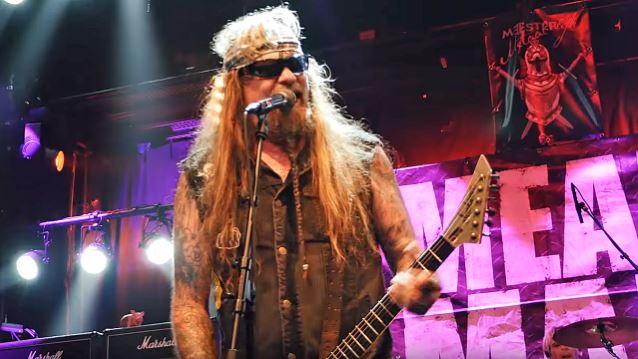 Former W.A.S.P. guitarist Chris Holmes has uploaded video footage from his recent run of European tour dates. Check out the clipo below.

Chris and his wife/manager Cathy-Sarah Holmes are starring in a new reality-show project called "Holmes Sweet Holmes". Twenty episodes have reportedly been filmed, with the first episode set to be released in the coming weeks.

Says Cathy-Sarah: "We are a part of this reality show who will have the colors of who we are and only who we are without game, without lies. This reality show will follow us on the road all around Europe, when we meet all of you and one of the principal goals will be to show you to follow your dream and never give up. For those who know our story, they will understand, and for the others, just follow us and let the show goes on!!"

In an interview with Noisey, Holmes talked about his decision to move to France back in 2014. He said: "My wife is from France. But since I left W.A.S.P. I dangled around in L.A., trying to find musicians to play with, but it just didn't work out. The change of culture in the last ten years… My kind of music isn't played that much — not like it was in the '80s."

He continued: "[A few] years ago, I pulled into a 7-11, and this kid got out of his car. He wasn't listening to rock. When I was his age, that's all I listened to. That made me realize the kind of music I do here anymore… [He was listening to] hip-hop. And I just don't play that kind of music."