Former W.A.S.P. lead guitarist Chris Holmes will release his new studio album, "Unbearable Influence", on September 26. A pre-order for the LP is available at Bandcamp.

Last October, Chris said that he would never consider returning to W.A.S.P. unless the band's leader, Blackie Lawless, agreed to pay him the publishing royalties that he allegedly owes him. He told Canada's The Metal Voice: "A lot of people think I made money from W.A.S.P. I've never gotten my royalties, or even my songwriting. All the stuff that I wrote, I've never gotten paid one penny. And you know whose fault it is? It's my my fault for not knowing the business, how it is. I trusted somebody.

"After every album, when the album is done, how they split up the publishing with the publishing contracts, the publishing companies — that's where the money comes from," he continued. "I was never told about when that meeting was. Because the other guys in the band never wrote — I was the only one [other than Blackie]. So I'm the only one that they have to screw over to get all the publishing. So I was never told. Then when I dug into it in about 2006 or [2007], I went into Sanctuary Music, had a lawyer go in to find out where all my publishing is, and I was written in as a session player into all the records. And if you don't know about it, and you're not told, and you don't see, you don't know. So I trusted Blackie Lawless about that. And when I found out, it really kind of yanked me wrong. It yanks me wrong — it makes me see he was sticking a knife in my back from the first day, from the first album, and not telling me, and being my best friend."

As far as Holmes is concerned, Lawless is solely to blame for him not getting his due from the W.A.S.P. records that he was involved with.

"If it wasn't for me, he wouldn't be where he's at — I guarantee you that," Chris said. "And then he screws me like that. It's all right. It's been a long time. It's something that I will never, never get over. I'll take that to the grave with me. I'm pissed thinking about it.

"Anyway, that's the kind of person he is. Everybody thinks, 'Wow! He's got the greatest…' Yeah, he's got an outrageous voice, Blackie, yeah, but he turns his back on his bandmembers real bad — he screws 'em. I'm the only guy in the band that ever came back to get screwed twice, which I did. I came back for 'Kill.Fuck.Die', and I was promised half publishing on that album. Didn't get crap. Knowing that I couldn't get in to see what was written in the contracts, of course. That's why I wrote the song 'Two Faced Mother Fucker'. It's about him. It's on 'Shitting Bricks'. And I've got one on the new album. It's called 'The Truth'. It says, 'You can't handle the truth.' It's on my new [album]. I'm gonna write a song about him on every album."

Addressing the possibility of his return to W.A.S.P., Holmes said: "Everybody asks me about a W.A.S.P. reunion. Sure, I'd love to play a W.A.S.P. reunion — if he pays me my publishing. If it doesn't, then he can have a reunion with Randy Piper, Johnny Rod and [Steve] Riley and everybody else. I'm not gonna play it. It's not worth it.

The documentary film "Mean Man: The Story Of Chris Holmes" was made available this past January on Blu-ray, DVD and VOD. It was written and directed by French filmmakers Antoine De Montremy and Laurent Hart. 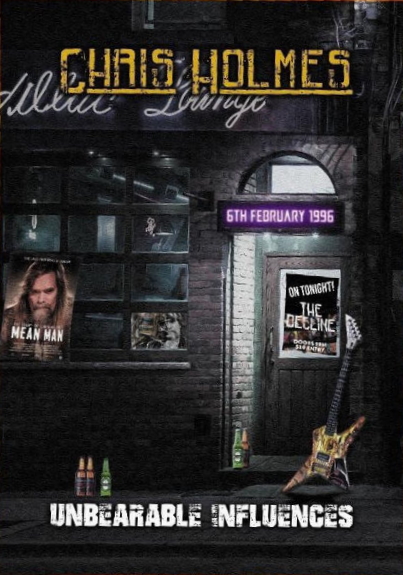