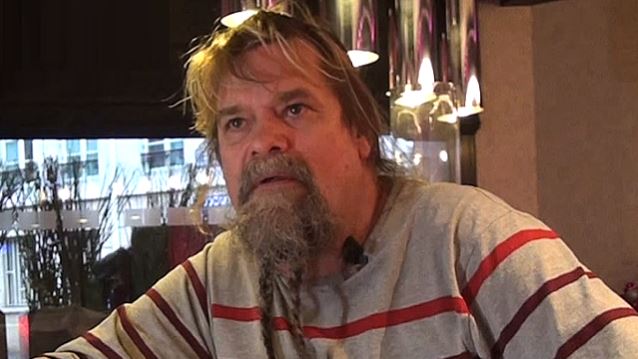 Dimitri de Larocque of "Tête-À-Tête" last month conducted an interview with former W.A.S.P. guitarist Chris Holmes. You can now watch the chat below. A couple of excerpts follow (transcribed by BLABBERMOUTH.NET).

On being in Paris shortly after last month's terrorist attacks:

"Screw the terrorists. I don't care what… It's shitty what they did last week, but it doesn't bother me. I like the city. The city is a beautiful city. I never got to go around on the subway and stuff, but this time I did. I like the city. It's beautiful."

On whether he's afraid of terrorists:

"No. No. No. What are they gonna…? I'm not gonna let them disupt my life or whatever."

On whether heavy metal is a job or a way of life for him:

On why he left the United States of America and move to France:

On his relationship with God:

"Well, I used to pray all the time, and then my prayers weren't answered, so I got tired of praying. So I guess my relationship with God isn't that good anymore. But I don't believe in the Devil either. I'm a skeptic. You know what a skeptic is? A skeptic is… I've gotta touch it. Like, this is a table [and I can touch it], you know? I can't touch God, so I don't believe in him. He never answered my prayers, so…"