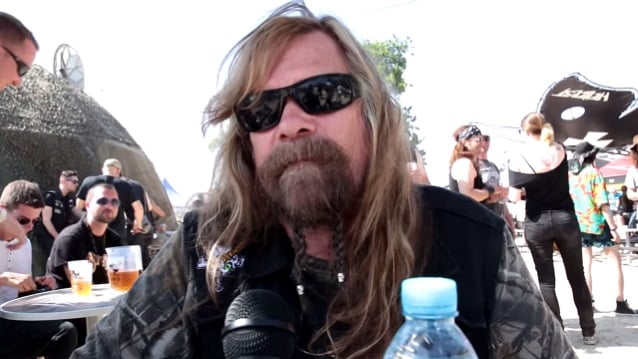 Kevin Oakes of Global Onslaught recently conducted an interview with former W.A.S.P. guitarist Chris Holmes. You can now listen to the chat in the YouTube clip below. A couple of excerpts follow (transcribed by BLABBERMOUTH.NET).

On the infamous scene in the "The Decline of Western Civilization Part II: The Metal Years" movie in which he can be seen guzzling vodka in his pool:

Holmes: "I've had a lot of people actually that part in that movie influenced them. When you're younger, you live by, 'Who gives a crap?' And when you get older, now I [am] 56. I didn't wanna make it to 56, but now I wanna live a little bit longer. I've got a few more goals to do."

On his inability to work with singers:

Holmes: "I sing. I sang on my last album [2013's 'Nothing To Lose'] and I sing on this one [next year's 'Shitting Bricks'] and I don't need to put up with any singers on the road. That's the worst thing to anybody that's in a band; to put up with their attitude — singers' attitudes. I will sit here and say that most of them are jerks. They call it LSD: Lead Singer Disease. It's a really bad thing to have. I haven't got it yet. I mean, I might get it, I don't know, if I sing. Gene Simmons [KISS] does; he's got LSD and he's a bass player. He plays bass and he's got LSD, I guarantee you that. Paul Stanley's [KISS] got it. Blackie Lawless [W.A.S.P.] has got it. Bruce Dickinson [IRON MAIDEN] don't; he's a singer. It's kind of weird. Dave Lee Roth [VAN HALEN]. Dave's Dave. I used to hate the guy, but Dave's Dave. His personality…Without him, they [VAN HALEN] never would have made it."