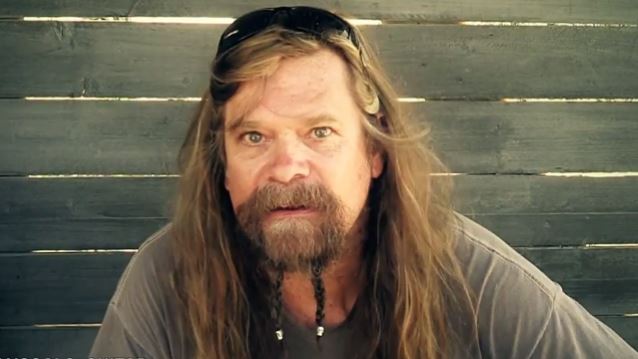 TV Rock Live conducted an interview with former W.A.S.P. guitarist Chris Holmes at last month's Hellfest in Clisson, France. You can now watch the chat below.

Holmes: "Tomorrow's my birthday. I'll be 56, man. It's alright. I'm still here, you know. I've been doing it a long time. I should be retired now.

"I quit [playing] for a few years, because it was so… what you played for, what you started playing for…. Like, Blackie [Lawless, W.A.S.P. mainman] would say he started to play music so he could get his dick sucked. Well, I didn't, because I had no problem doing it before. And I don't know about doing it for money. It's something I enjoy doing.

"I'm a flamboyant person, I guess. I'm loud. I don't care what people think too much, so I have a fun time opening my mouth. But I'd like to say I've paid the price a few times by getting my teeth knocked out by [people I've offended]."

On his next project:

Holmes: "My new band, it's called MEAN MAN. I'm mixing the record and I'm finishing the whole shots for the front and stuff, and it should be out in February. I've got one guy from Finland I wanna work with. I'm looking for another guitar player — lead or whatever, rhythm — that can sing half the stuff. And then a bass player. So two other members. And I moved to Cannes. Not trash can. Cannes, in the south of France. And I actually caught two fish there the other day. I didn't know there was fish there. I kept throwing the lure out and finally I caught one. I was, like, cool."

Holmes last year released a solo album called "Nothing To Lose". Chris composed, performed, and produced the music and vocals, and teamed up with former MOTÖRHEAD drummer Phil "Philthy Animal" Taylor to perform on and engineer the effort. A follow-up CD, "Shitting Bricks", has already been recorded but has not yet been mixed.