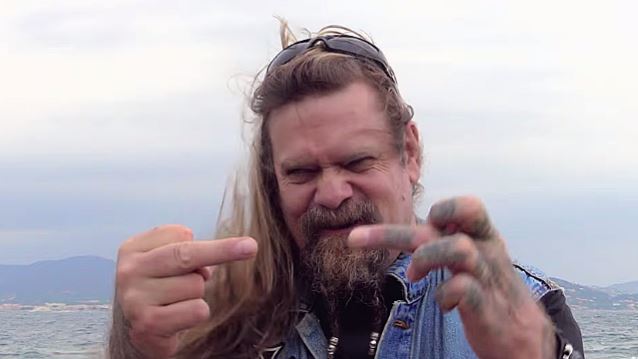 On February 12, Jason Saulnier of Music Legends conducted an interview with former W.A.S.P. guitarist Chris Holmes. You can now listen to the chat in the YouTube clip below. A couple of excerpts follow (transcribed by BLABBERMOUTH.NET).

On his new video, "Let It Roar", which has gotten more than 130,000 views on YouTube since late January:

Holmes: "[Compared to] other YouTube videos I did, it's gone up real fast. I think it's 'cause of all the bad publicity on Blabbermouth. I'm not sure. Yeah, it's up to 120 [thousand], or 119 thousand right now. Yeah, I feel good about it, though… I did my solo album last year, and we didn't promote it very much. And since that's been out, we've been able to promote that I'm on my own, or whatever, without W.A.S.P. The other songs on the album, I think, are just as good. I'm gonna go out and tour and play all of 'em, except for the two instrumentals that I didn't sing on."

On whether it feels good to be singing in a band for a change:

Holmes: "In the W.A.S.P. days, Blackie [Lawless, W.A.S.P. mainman] was too busy being Blackie. He never once wanted me to sing or whatever, so I never sang. The way I looked at it, why should I do twice the work for the same amount of money? Right? And you can entertain more when you don't sing. But I've had a fun time putting words together, with certain meanings, and see if people figure it out or whatever. And it's challenging, in a way, putting words together. I like it. As [far as] playing live [goes], I haven't sang a whole show yet live. I've played a few shows where I sang three songs or two. But in about a month and a half, I've gotta do it, you know. I made sure the songs are a little easier instead of screaming in every song."

On the inspiration for the "Let It Roar" video:

Holmes: "I live in France now, and a lot of that is just filmed where I live. And we just went walking down the street with a camera. Me and the guy that filmed it, we just went walking around. And I was fishing too; he wanted to film me fishing. He just said, 'Let's just film you having fun or doing things you like to do.'"

On his goals as a musician:

Holmes: "Oh, man. To make enough [money] to retire…. [Laughs] What do you consider enough to retire? You know… I mean… What goals…? How about this? My goal is go to the Grammys now. That's a goal I have. By myself, you know. Or get put in the Rock And Roll Hall Of Fame by myself. I'd like to do that. I don't know…. W.A.S.P. would probably get put in there first — if they ever did — but it would be a dream of mine to do it by myself. Blackie Lawless is actually the only guy in W.A.S.P. now that's an original guy, but he still uses [the name] W.A.S.P., he doesn't use 'Blackie Lawless.' But I can't do that. I've gotta use my name. So I guess it'd be a personal thing to see if I could do it myself."