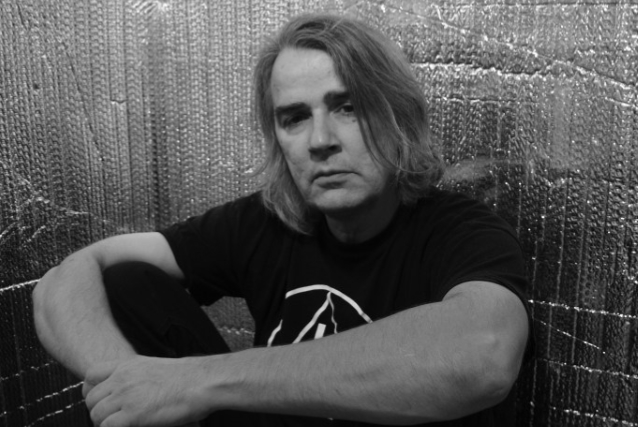 Ex-VOIVOD bassist Jean-Yves "Blacky" Thériault has accused his former bandmates of fraud, claiming that they have tried to cut him out of his rightful royalties for the albums that they wrote and recorded together.

According to Blacky, he was recently informed by the U.K. branch of BMG that a sum of CAD$16,000 (Canadian dollars) will be paid out to him, representing the funds he is entitled to in connection with the re-release of some of the band's classic recordings.

In a press release posted on his web site, Blacky claims that VOIVOD drummer Michel "Away" Langevin and manager James Maclean from Talk's Cheap Management received 7,000 British pounds (approximately CAD$14 000) in 2007 in advance of the re-release of three VOIVOD albums that Thériault had co-written — "Rrröööaaarrr", "Killing Technology" and "Dimension Hätross". However, when the band reformed a year later, in 2008, Away and Maclean "kept Blacky in ignorance of the fact," the press release states. "His intuition that an advance might have had been paid by BMG to the band in order to prepare the re-release finally turned right."

Blacky comments: "What they did is fraud, as simple as that!"

The bassist also claims that 50% of his copyright in VOIVOD's acclaimed 2013 album "Target Earth" had been "fraudulently diverted by Away and Maclean into a setup rights management company without any prior consent on his part," which he calls "an act of misguidance, false representation, and fraud violating the Copyright Act."

While he was still a member of VOIVOD, Thériault "was kept out of the decision-making process," he now claims. He goes on to blame "important disagreements over management and lack of transparency" for his decision to exit the group for the second — and presumably final — time in 2014.

Blacky has vowed to get his hands on other royalties he is entitled to from all the record companies involved. "These are my copyrights," he says. "I will keep on battling until I get every penny they owe me."

Asked whether VOIVOD singer Denis "Snake" Bélanger and Christine D'Amour, the sister of late VOIVOD guitarist Denis "Piggy" D'Amour, are aware of the payment that has been granted to him, and which he insists they should claim as well, Thériault says that he tried to contact them regarding the matter over the course of the last few months, but he has not received a response.

Blacky says that more details about his time with VOIVOD will be revealed in the upcoming book "Camera Obscura: Lights On Voïvod". The author, Monica Emond, has collaborated with Thériault on the musical project CŒUR ATOMIQUE, and will base her "critical bio-essay" on in-depth interviews and exclusive material.

Blacky originally left VOIVOD in 1991 for personal reasons. He returned to VOIVOD in 2008, playing his first show with the band in 17 years in front of 22,500 fans as part of the Heavy MTL festival at Parc Jean-Drapeau in Montreal, Quebec, Canada.

In a recent interview with Sonic Perspectives, Away stated about Blacky's latest departure from VOIVOD: "Blacky left because he couldn't agree with the rest of the band on how the band should be managed. He's more of a DIY guy, which we totally respect, but we, nowadays, are more inclined to be signed to a big label, Century Media/Sony, so we had some differences in opinion. That was one of the main reasons."