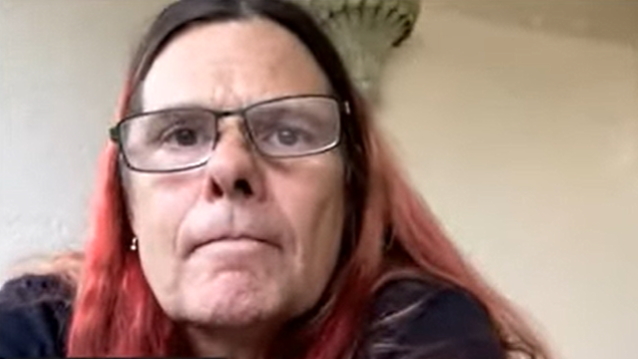 Former TESLA guitarist Tommy Skeoch, who left the band in 2006 to receive treatment for substance-abuse issues, has shot down the suggestion that he is still in the throes of addicition.

"I get the feeling people think I'm just out gettin' full-tilt boogie and wild all the time, and, really, man, my home life is very domesticated, especially with the kids," he said during a brand new interview with Waste Some Time With Jason Green (as transcribed by BLABBERMOUTH.NET). "Now, there was a period when I was abusing drugs and all that, and I did it through all that domestication as well. But it's not what you think — it's not what one would think, I would think.

"That whole thing with the drugs and everything is so old hat for me, man — I'm so over it," he continued. "I don't even think about it anymore, and I don't do drugs anymore. And then people bring me up.

"God bless — I love [SiriusXM radio personality] Eddie Trunk, but I did an interview with him, and he brings it up all the time, almost with the implication that I just got done with a run or something. It's kind of old, man. I'm just done with it."

Skeoch also denied ever having suggested that TESLA had lost its hard-rocking attitude after his departure from the group.

"There's even people saying that guys in TESLA think I'm out there saying that when I left that all the band left the edge," Tommy said. "And I'm not saying that, but their fans are saying that… But it's true. I'm not trying to say anything bad about anybody. This is things the fans say. I'm just listening to it, man."

This past February, TESLA bassist Brian Wheat told "The Chuck Shute Podcast" that he didn't think he would ever be friends with Skeoch again but that he harbored no resentment toward his former bandmate.

"He was in the band, and he got several chances to stay in the band, and he chose not to," Brian said. "And then he went around saying some not-nice things about me. Why he singled me out, I don't know, but he chose to. He didn't say bad things about other people in the band — he just wanted to use me as his target. Probably 'cause I was the one that was the most vocal and honest about his shenanigans. So, being that as it may, I don't have a desire to call him up and say. 'Hey, let's be friends.' If he called me and said, 'Hey, man, I'd like to clear the air,' I would accept it. And I'm not saying he has to call me. I'm not gonna call him, 'cause what I know of him, he'd probably tell me to fuck off, so I'm not gonna call him. But it's not like I have this deep desire to become friends with him, like there's something missing in my life, 'cause there's not. And I don't wish him any ill will — I don't have a voodoo doll of Tommy that I'm poking with a pin. I wish him all the best. I mean, I heard one of his songs the other day from his new band, and I thought it was really good. I was, like, 'Great. Fantastic. That's the Tommy Skeoch I know. That's the kind of work I'm used to him doing.' And then, after saying that, he calls TESLA — he says that the music we do now is lounge music. So every time I start to feel something for him, he opens his mouth and says something negative about the band or us. And I just figure, then again, he hasn't grown up. I don't know. The only time I really talk or think about him is when people like you bring it up. I don't sit around and contemplate what it would be like if Tommy was here."

"I have to tell you, I love Tommy Skeoch," he said. "I just did an online masterclass — the Rock 'N' Roll Fantasy Camp — and I broke down 'Modern Day Cowboy' and how Tommy and myself collaborated and worked on that music together.

The band is currently mixing its debut album, which was recorded over a 21-period at Sound Stage Studios in Nashville, Tennessee with producer and engineer Michael Rosen.