Former SLIPKNOT percussionist Chris Fehn appears to have settled his lawsuit againt the band on claims he hadn't been properly compensated for his years of touring and recording with the group. Fehn, a member since 1998, was officially dismissed from the band early last year.

The case was voluntarily discontinued on October 29 "with prejudice," meaning Fehn can't refile the lawsuit on the same claim.

Because confidentiality and non-disparagement clauses are often found in settlement and severance agreements between individuals and their employers, the existence of any settlement agreement between Fehn and SLIPKNOT and its terms will likely be kept private and never publicly revealed.

Fehn sued SLIPKNOT members Corey Taylor and Michael Shawn Crahan (a.k.a. Clown) in March 2019, claiming that he had been told that all the band's income was being funneled through one company that split the profits between the group members. But he alleged that he later discovered the existence of several other SLIPKNOT-related business entities through which other members were collecting more money.

Chris was replaced in SLIPKNOT's touring lineup by a percussionist nicknamed "Tortilla Man." Tortilla Man is believed to be the multi-instrumentalist Michael Pfaff, who played keyboards with Crahan in the band DIRTY LITTLE RABBITS and is also a member of the Iowa-based duo THE SNACKS.

Tortilla Man joined SLIPKNOT in May 2019, when he was first featured in the video for comeback single "Unsainted".

SLIPKNOT's latest album, "We Are Not Your Kind", was released in August 2019 via Roadrunner Records. 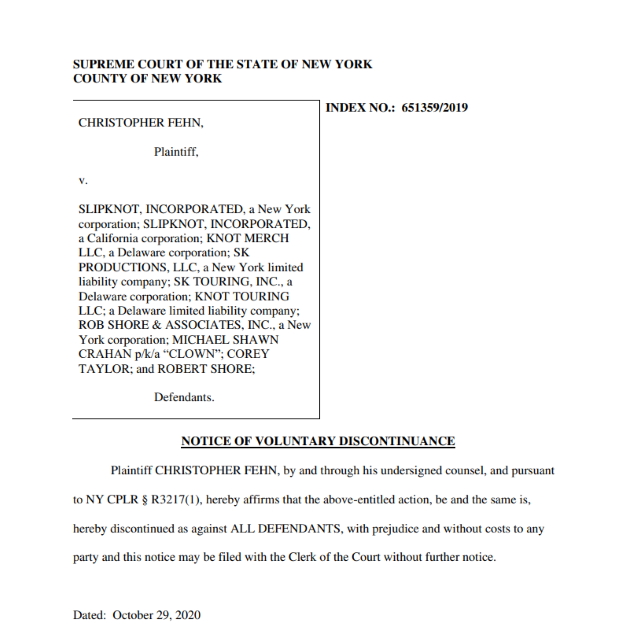