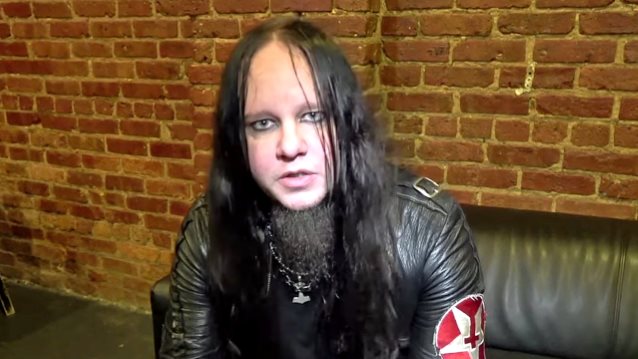 On the latest episode of Digital Tour Bus's "Dream Tour", former SLIPKNOT and current VIMIC drummer Joey Jordison discusses his ultimate tour lineup. The clip, which was filmed on December 28, 2016 at the Bottom Lounge in Chicago, Illinois, can be seen below.

Said Jordison: "I've been on a bunch, as you all know, and I've done many a tour where I got to actually have the privilege to play with so many bands have influenced my career. Still, and all the band would still love, and it'd be a dream, to open for KISS back in '75 when 'Alive' came out. I got into 'em in around 1980, and since then, of course, they have been a huge influence on me and always will be. And all the guys in [VIMIC] are huge KISS fans. So there's number one. Number two, I got the privilege to tour with these guys, and not only tour with them, I got to play with them. So METALLICA is always on the top of the list. Also FAITH NO MORE or MR. BUNGLE would be killer to tour with. Also all the guys in ANTHRAX are good friends; that would be a good one. Also to tour with MESHUGGAH would be amazing as well. So there's your list."

VIMIC earlier in the month postponed its previously announced European tour so that the group could finish work on its debut album, to be released later this year.