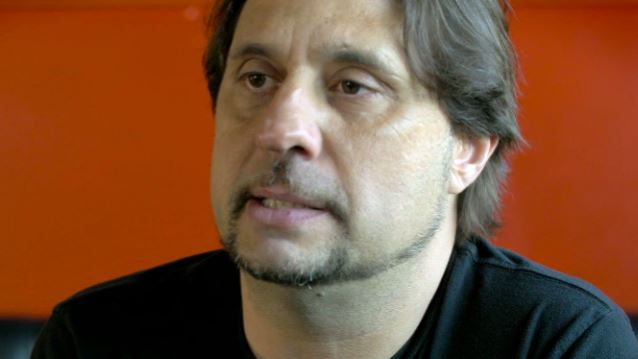 Former SLAYER and current DEAD CROSS drummer Dave Lombardo was interviewed on a recent installment of HATEBREED frontman Jamey Jasta's official podcast, "The Jasta Show". You can now listen to the chat using the SoundCloud widget below.

"It's inspiring when you see somebody do it that way, but then it's very heartbreaking when you see someone like Jeff leave us at that age, and know the reason why, and doing everything you can in your power to help him get out of it, but it didn't work."

He continued: "That's what I think sucks about [how] sometimes these bands that they… they break up and then they don't work together again. And it's, like, when the person dies, it's over; you can't jam with that guy again. And that's the thing that gets me is that when these musicians pass away — whatever it is; natural death or disease or alcohol or whatever… drugs — you can't jam with those guys [again], you can't feel that connection. What you feel with your bandmates, if something happens with one of your bandmates, it's over. I think that, for me, is the most heartbreaking part when you lose a fellow musician is that you lose that musical connection, that magic that happens when only you guys play together. You could bring anybody else on there, but it's not gonna be the same; the energy is just different."

Lombardo added: "Being able to process what happened to Jeff… It was rough when I first heard about it, and still, the person, the human being, I still think about him on occasion; he comes to my mind."

Hanneman died in May 2013 from alcohol-related cirrhosis of the liver. He is credited for writing many of SLAYER's classic songs, including "Angel Of Death" and "South Of Heaven".

In addition to Lombardo, DEAD CROSS features members of THE LOCUST and RETOX. The band's first studio recording, a song called "We'll Sleep When They're Dead", was recently made available.