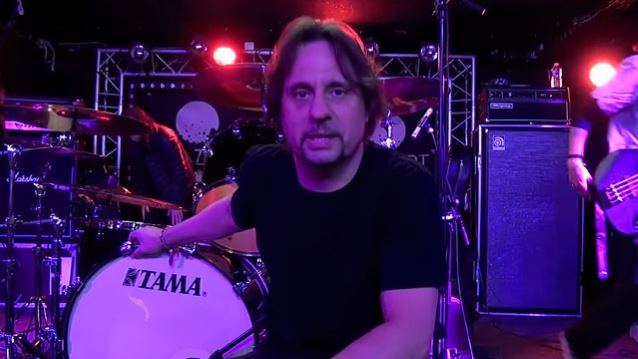 Metal Mark of SkullsNBones.com conducted an interview with former SLAYER and current PHILM drummer Dave Lombardo before PHILM's February 23 performance at the Saint Vitus bar in Brooklyn, New York. You can now watch the chat below.

Speaking about his decision to go back playing Tama drums, Lombardo said: "I worked with a couple of other drum companies, and, you know, Tama's my first love. It was the drum set that kicked off my career. I mean, if you look at [SLAYER's debut album] 'Show No Mercy', [which came out in] 1983, I was using a Tama kit. My dad bought me my drum set in 1979. I was 15 years old. I had this Tama-Paiste cymbal setup and I fell in love with it. And I used it all throughout until 2009 or 2010, and then I left Tama for a few years. And now I'm back. It just feels right. And I'm happy that the representatives, the artist represtantives, at the company, the same ones, are still there. They're not changing or losing momentum or anything. It's great. It's really great. It's like old friends."

Lombardo previously stated about his decision to play a Tama kit: "You know, Tama, for me, when I was growing up, was like the kit. I always saw Tama… on TV, on videos, on the back of albums in stores. So that name stuck with me. I went to Guitar Center when I saw a set of Tama drums, and was, like, 'Wow, this is what I want.' And then when I got the drums home, and it was just a great drum set. I loved the craftsmanship. It was just the drum set… and it still is. I mean, if you're a drummer, Tama's a great product. And it was an inspirational part of the whole thing."

Lombardo most recently played a custom-made kit built by Ludwig, a company made famous by drum legends like Mitch Mitchell, Ginger Baker and so many more of Lombardo's personal influences.

"I had left Tama and I was with this other company, and it didn't work out," Lombardo told Guitar Center about his decision to play Ludwig. "I was on the fence, and everybody said, 'Oh, you can go with any company you want.' But I wanted to make it special, and something that I connect with. Then Kelly Paiste [from the Paiste drum cymbal company] asked me, 'What drummers did you look up to, and what did they play?' Basically, all those guys played Ludwig. So she goes, 'There it is. There's your answer.'"