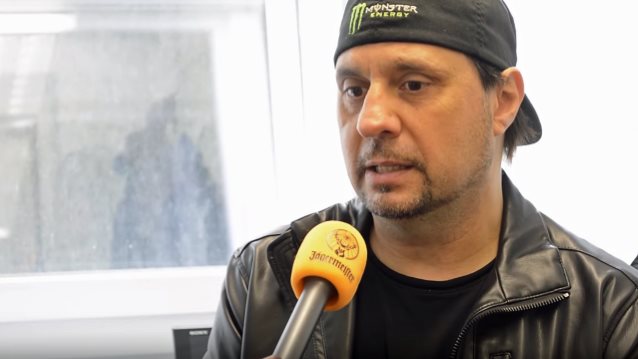 Finland's Kaaos TV conducted an interview with former SLAYER and current SUICIDAL TENDENCIES and DEAD CROSS drummer Dave Lombardo prior to SUICIDAL TENDENCIES' June 30 performance at the 20th-anniversary edition of the Tuska festival in Helsinki. You can watch the full interview below. A few excerpts follow (transcribed by BLABBERMOUTH.NET).

On how SUICIDAL TENDENCIES' recent festival dates have gone:

Dave: "Awesome. It's great to be on these festivals. We're very grateful [that] we've been asked to do these shows. Obviously, we have a really good album out called 'World Gone Mad' and we're here to support it. It's been a lot of fun."

On whether he's pleased with the reaction to "World Gone Mad":

Dave: "Yeah. Everybody has been very supportive of my contribution to SUICIDAL and my participation in the band. I'm very grateful, being in this position where I'm performing with such a legend like [vocalist] Mike Muir. I've known Mike for many years. SLAYER and SUICIDAL go back to the early '80s. I remember seeing SUICIDAL back in '82 at some shows in California. This was before we toured with them. I've been a fan since."

On whether it was a "dream come true" to join SUICIDAL TENDENCIES:

Dave: "It was definitely a band that I would have always liked to have worked with. It's always one of those things: 'Yeah, I'd like to work with SUICIDAL.' SUICIDAL has a style, Mike Muir's songwriting is very unique and has a signature style and sound. He brings in that crossover style of music. I enjoy playing not only metal, thrash, I like funk and I like a lot of different grooves. Working with SUICIDAL is definitely a dream come true. It's good."

Dave: "I thought he wouldn't be interested or maybe he was too busy because he is working with FAITH NO MORE. He always has something going. Then, he started typing and then he stopped. Starting typing, then he stopped. Then he came back and said, 'I would love to!' And I'm, like, 'Yes!' I couldn't believe it. I expected him to say no, which was fine because I understand. But yeah, he said yes. I love the album and he's very happy and we're doing some shows in the U.S. We'll see how it goes. Maybe we'll bring it to Europe."

On whether he has the "feel" to handle playing in a hardcore punk band like DEAD CROSS:

Dave: "I personally feel I do. I love music in general. I love all styles of music and whatever style of music I'm asked to perform in or record, I always try to do a little of adapting and try to make sure that I don't overplay, that I give the music what it needs. Some drummers, they just play too much. They don't understand what it is to contribute to the body of work, to the body of music and what it needs. You have to contribute the right amount of input of your style. If you give too much, I feel that sometimes the value, it decreases. But if you give it that perfect amount, then it's good, it's gold. You have to be careful and not overplay."

Dave: "That's my biggest complaint. When I listen to music, I'm not hearing the band, I'm listening to the producer and the engineer and all the edits to make the drum tracks sound like a drum machine and perfect. For me, unless you're an industrial band, that's okay if you're an industrial band, but if you're a thrash metal band or even a rock band, I think sometimes it needs to be a little loose. It needs to have a human feel. When we recorded this, there was no click metronome. I didn't follow a metronome. I just went for it, punk-style. Even though we had the studio for a month, you go into the studio thinking 'I only have two hours to record.' You make sure that you get it down and you get it down perfect and you make sure that you rehearse with the band before you go into the studio, so that way the engineer or producer doesn't mess with your drum sound. It was intentionally created to be a pure punk/thrash album."

On whether SUICIDAL TENDENCIES is his main priority at the moment:

Dave: "I have a very good manager and my assistant, they work my schedule very well. I give all my projects one-hundred percent and there is no priority over the other. SUICIDAL is busy, so Mike, he wants to do some shows and I'm happy that he's willing to do shows. I'm going to do my best to work with SUICIDAL as well as DEAD CROSS and also the MISFITS. I'm living out of my suitcase a lot. [Laughs] But it's good. I'm very happy. I'm happy to be on the big stages. I love playing; I've been playing ever since I was a child. This is my life, this is what I do. I don't see myself sitting on a couch at home. I will never retire. I never want to stop playing. As long as everything is working, I'm going to be playing for the people, which is where I belong is onstage."

"World Gone Mad" was released last September. The follow-up to 2013's "13" disc was SUICIDAL's first to feature Lombardo and guitarist Jeff Pogan, who replaced Nico Santora in May 2016.

DEAD CROSS's self-titled debut album will be released on August 4 via Ipecac Recordings. The effort was helmed by producer Ross Robinson, who has previously worked with KORN, DEFTONES, SEPULTURA and LIMP BIZKIT, among others, and was mastered at Golden Mastering in Ventura, California.