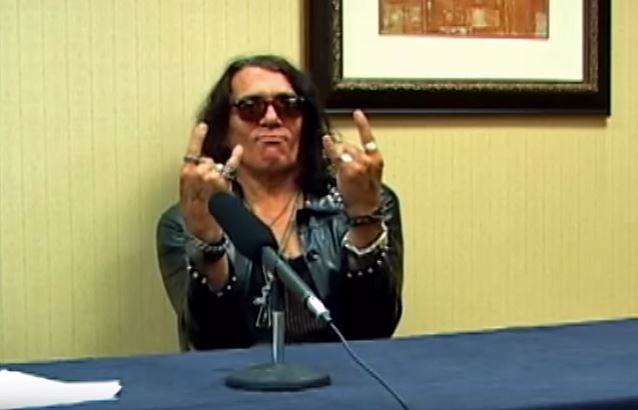 Mike Preston of Psycho Babble TV recently conducted an interview with former RATT singer Stephen Pearcy. You can now watch the chat below. A couple of excerpts follow (transcribed by BLABBERMOUTH.NET).

On his decision to release each song individually from his forthcoming solo album, "Smash", to be made available via Stephen's Top Fuel Records:

"What I wanted to do was…. We had so many songs, I was actually mocking the project and titling it 'My Physical Graffiti'. Because there's gonna be, like… We have, like, 25 songs, and I go, 'Okay. Well, I'm picking these 20.' And we're gonna complete 'em all. And at the end of the day, it'll be a full package and CD and whatever, an LP and whatever format you choose, but I'm going to give every the same attention and make every song a single. And that's pretty much it. So not one song will be favored over another. And the first song we released, 'I Can't Take It', I was fortunate enough to get [early RATT producer] Beau Hill back into the mix. We've always, kind of, been in contact, and I tried to get him back to do RATT stuff, and it never gelled. I've always admired his way and I always use his process, to this day, no matter who's producing and what project I'm in — I still kind of use the same element of recording and procedure that I learned from beau. And so I got ahold of him and he mixed and mastered the first single, and he did the second one, so I'm actually releasing two versions of each song — one his mix, one our mix, Top Fuel Records mix. And end of day, we're gonna have a lot of great songs that cover an array of ebb and flow, and heavy to… It just takes on a whole different element when you can have that much time to spend on each song. You know, we're not in a rush. And the other thing is we're on the road. This is probably the most extensive touring we've done… We're doing anywhere from, like, I don't know… two to five shows a month… Which is fine, because I have a busted-up knee that needs to be repaired. So we're all good, though, and it's working."

On embracing modern technology and continuing to make new music despite the dramatic decrease in record sales:

"Well, I'm not a complainer and I wanna be responsible for my own destiny, so to speak, which led me to finally say… When we got [bassist] Juan [Croucier] back into RATT and it didn't work, we knew right away… It was great having [Juan] back, and we'll eventually do something together, but the thing is, when you get a fourth element, and a very important one, back into something and it doesn't work, then you know you have a problem. Everybody can point fingers, or one person can point fingers, but the truth is, it's not allowed to work. So we took ourselves out of the element. And me, finally, I had enough. It was, like, I did my thing, I created this beast. Thirty-something years later, the songs still do well. I just did a movie, 'Wicked City' [referring to ABC's upcoming ten-episode anthology series, which premieres in late October]. [We] re-recorded some MICKEY RATT [Pearcy's pre-RATT band] songs. They had a MICKEY RATT cover band, [and] I did an acting part in it. So there's other things to do than dwell on your past or try to re-live it, and move ahead. I just like writing music, and getting out and yelling at people is a whole another ballgame."

On whether there's a coherent vibe or mood to his upcoming solo album, "Smash":

"Of course. It's being live — it's putting the live thing on record… record… well, whatever it is. So that's what I like about it — being able to get us out here and get the live vibe, and then studio, going right into the studio, and making it happen. But we're usually prepared. Even back, doing the RATT records, we'd go into pre-production and we'd work the songs up, and some songs make it, and some don't. And you do the best you can. We started working on a new RATT record, Warren [DeMartini, RATT guitarist] and I, probably a couple of years back, a few years back, and we did record one song. Whether it sees the light of day, I don't know, but if it's the last thing that comes out, I'll be very happy, 'cause it's a great song Warren and I wrote."