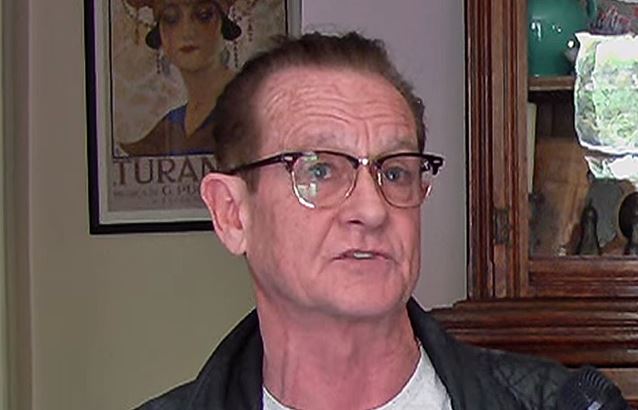 Eric Blair of "The Blairing Out With Eric Blair Show" recently conducted an interview with legendary hard rock vocalist Graham Bonnet (RAINBOW, MICHAEL SCHENKER GROUP, ALCATRAZZ, IMPELLITTERI). You can now watch the chat below. A couple of excerpts follow (transcribed by BLABBERMOUTH.NET).

On the state of the music business:

Graham: "I think it's gone down the shitter, basically. The music business right now is nonexistent. If you don't go out and play, nobody knows you exist. Nobody buys CDs anymore; everybody's downloading and listening to music through little tiny… those little earphones that don't really give you the true vibe. The music business… If I was in it now, I would get out; I really would. 'Cause it's non-productive. Everything is Auto-Tuned and plastic and disco. I don't really like what's going on right now; there's nothing new. The new rock bands that are around now, there's nothing I've heard that makes me kind of go, 'Wow, that's different or good.' It's all rehashed, sort of LED ZEPPELIN copy bands. It's…. I don't know… just not very inspiring. That's why I'm looking forward to actually doing something new with [GRAHAM BONNET BAND]."

On what advice he would give to his younger self:

Graham: "Don't do it! [Laughs] Get a real job. Yeah, look after… [I would tell myself to] look after the business side more than I did. Because I'm not Mr. Businessman at all. From the word 'go,' when I was 19 years old, back in the '60s, when we first started to record, my cousin and I, everything was taken care of — our tax, our housing, our blah blah blah… everything! I never signed a check ever, or anything, so I was totally shielded from the real world. And to this day, I'm still a baby when it comes to the biz, 'cause I don't know what to do. You know, taxes… What do you mean? What do I do? What form? I don't know what they are. I know people that are my age that are the same. And they don't drive. I don't drive. Ritchie [Blackmore, RAINBOW leader] didn't drive until, probably, twelve years ago. He didn't drive either, because there's always someone to take you wherever you're doing. I was spoiled, like all the other brats back then; I was one of them. So the business side is something that, I think, kids now actually do look at; they're more business savvy than I was."