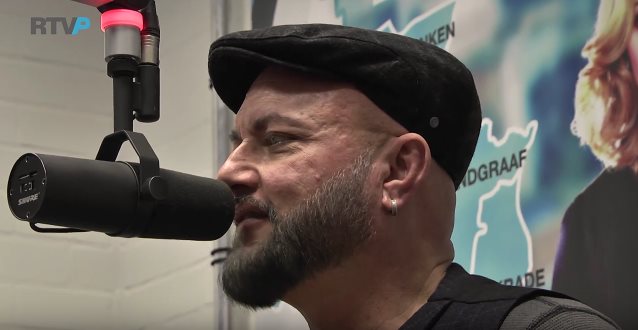 On his recent acoustic tour:

Geoff: "I'm doing an acoustic performance of my life story in music. Songs from all of the different records, and done in an acoustic fashion with acoustic guitar, mandolin, violin, cello, and an interesting percussion instrument called a cajón, which I believe is an Irish instrument. I have Scott Moughton on acoustic guitar, who also plays with me in my OPERATION: MINDCRIME project, and the rest of the lads are in an Irish band from Cork, Ireland called THE BAND ANNA. They're a fantastic band that my wife and I saw playing in a city park in Cork last summer. We loved their energy and their attitude, and we hired them to be our band for this upcoming tour. They're fantastic, a great bunch of guys. Very enthusiastic and wonderful musicians."

On the concept behind OPERATION: MINDCRIME's first albums:

Geoff: "It's a trilogy. I've been thinking about this for many years and a couple of years ago, my wife Susan and I were on a trip, a holiday through Spain. We walked the Camino de Santiago pilgrim trail, which was an amazing experience. On the trip, I came up with the idea for the trilogy albums, the concept and the story. I started writing while I was on that trip. The story just really came to me. It's been a really wonderful journey putting these albums together. We recorded all the music at the same time. Then, we've been releasing the records separately once every year. The first one was called 'The Key', the second one is called 'Resurrection' and it came out last September. The third one comes out next September. Then we tour."

On selling a reported 21 million records in his 30-plus years as musician:

Geoff: "I don't actually know how many records we sold. In fact, I don't know if anybody knows how many records they sold. It's almost impossible to account for everything. But I know it's millions and it's a lot. I know I'm fortunate to be able to travel around the world and come to a city and play a show and people come there, and they know the music, and they sing along. That's a wonderful, wonderful thing."

On why QUEENSRŸCHE didn't have more success in Holland:

Geoff: "Gosh, I don't know. [Laughs] We recorded an album here at Wisseloord Studios years ago called 'Operation: Mindcrime', the first one. That was a wonderful experience. We've been touring all of my life it seems like. I've played shows in 64 countries now around the world. I never run out of places to play. [Laughs]"

On his thoughts of Holland:

Geoff: "Holland is a beautiful country. It's different everywhere you go. I think the north is very different from the south and east and west is different, but the people are very similar everywhere you go. They're very open and curious, and adventurous people. Always kind. I travelled to a lot of different places in Holland and been in situations where I've needed help, like my car is broken down, or I needed directions. In Holland, people help you. They actually give you directions, they help you out; they'll get out of their car and help you change your tire. Other places you go that doesn't happen. You're on your own."

On what people can expect from one of his acoustic shows:

Geoff: "They can expect a lot of stories. I have stories for all the music that I'm playing. Interesting stories about the songs or how they were written, or interesting antidotes as to what happened while making that song. Stuff that I always wanted to know when I would read a book about a musician. I always wanted to know, 'How did you come up with that idea? Or what led to that idea?' I tell a lot of stories and the music is very intimate. When you play acoustically, it's interesting because you're reversing how the song was written in a sense. Most songs, in my experience, are written on either an acoustic guitar or piano, then you start building them up to what they become for the record. You add different guitars and drums, and that kind of thing. This is reverse engineering. You're bringing the song back to where it started, which I like."