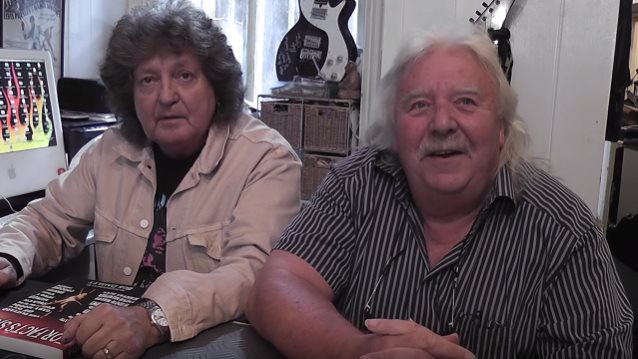 Last month, more than a few eyebrows were raised when famed QUIET RIOT drummer Frankie Banali told Songfacts writer Greg Prato that he was the one who came up with the explosive drum fill that opens Ozzy Osbourne's 1981 classic "Over The Mountain". Both Bob Daisley, who co-wrote the track, and Lee Kerslake, who co-wrote the track and drummed on the original recording, dispute Banali's claims. In an exclusive feature by music writer Joel Gausten, all three musicians defend their positions while offering their individual versions of the events that led to the writing and recording of the song.

Daisley told Gausten: "The writing started when Ozzy, Randy and I got together at the end of '79. We had a roadie with us called Spencer, and he was filling in on drums. He played drums when we were writing this stuff, and I was taping it all on my tape machine just for reference so we wouldn't forget anything. We were all trying to put songs together. If Randy [Rhoads, then-Ozzy guitarist] had that riff, we would have heard it, and I would have a recording of it without a drum intro before Lee had joined the band."

He continued: "When we first started playing 'Over The Mountain' during the writing session for 'Diary' in January 1981, Randy had the basic riff. The writing sessions for 'Diary' had begun in late 1980, but we hadn't heard Randy's 'Over The Mountain' riff until early 1981. I co-wrote the music with Randy for the rest of it. Ozzy wasn't even there. Also, Randy was playing the riff in eights, and I said, 'Do it in sixteenths.' So that was new, and we'd been doing that for a little while before Lee did a drum intro thing to it. We felt, 'Yeah, that's great!' But that drum intro wasn't anything that any of us had heard before; it was Lee's — no one else's.

"How would Randy, without a tape or a recording, relay a drum fill? What would he do, sing it to us? Even if he had, there's no way that Lee would want to play or copy something that someone else had done, and there's no way — out of principle — that I would use something that was stolen.

"Lee was a name drummer from a big-name band; he would not be interested in using something from an unknown drummer from an unknown band, and even Randy was unknown at that stage. None of us had heard of QUIET RIOT or Frankie Banali, and we'd never heard anything that any of them had played until Randy came on the scene in forming the THE BLIZZARD OF OZZ with me and Ozzy.

"Maybe Frankie did play a drum fill intro thing to something that Randy had been playing at that time in L.A. when they first met Ozzy and that happened with Dana Strum. It's possible that Randy had a riff that Frankie did a drum intro to, but it wasn't the 'Over The Mountain' riff, or at least Randy never played it to us when we were looking for material for the first album. He didn't play it to any of us until we began writing for that second album, 'Diary', a year after the writing sessions for 'Blizzard'.

"If Frankie Banali played a drum intro to a riff that Randy had played, it wasn't what Lee played on 'Over the Mountain', and I very much doubt that the riff was the 'Over The Mountain' one, either. I'm not calling Frankie Banali a liar; he may be mistaken or it could be a coincidence, but Lee came up with the drum intro for our song."

Kerslake concurred, telling Gausten: "I don't understand why [Frankie] wants to take credit for something that he didn't do; I feel strongly about this. Frankie didn't know us; he didn't know the music. We did 'Blizzard Of Ozz', which I played drums on and co-wrote a couple of tracks, and then I did 'Diary Of A Madman' and co-wrote six tracks. We had all new riffs coming out. Randy started playing the 'Over The Mountain' riff, and I said, 'Yeah, hang on a minute. I have an idea for a great opener to get this to make people listen.' The first fifteen seconds are the most important in any song; that's what gets a DJ to play it. It's been that way for years. So I said, 'I'm going to put this in.' I played it, and Randy jumped through the roof, like, 'Wow, man! That's great!' Bob said, 'Yeah, mate. Fuckin' great.' I said, 'Yeah! Let's start there.' That's how we did it, and I was very proud of myself. In an interview, Tommy Aldridge was asked, 'Did you do that track?' He went, 'No, no, no. I didn't touch that; all that work was done by Lee.'"

Banali, for his part, stood by his claim that he came up with the "Over The Mountain" drum fill, telling Gausten: "[With] a lot of the riffs that Randy was coming up with, some of them were new riffs and some of the things were from previous QUIET RIOT songs that were recorded or QUIET RIOT songs that never were recorded. That triplet thing just happened in the studio. I think Dana Strum, who was the bass player when we did about a week's worth of rehearsals, will probably verify that. I've never claimed that he took the riff that I did, because there are similarities but they're different…

"So, [was it a] coincidence? Probably. But did I play it? Absolutely. Did Lee play triplets on the front of that? Absolutely. Did he get it from me? I don't know that he got it from me; I don't know that he ever heard any recordings or if it's just a plain coincidence. But there's no back-biting here. Whether a person believes it or not, it's not like I'm going after Ozzy because I came up with a drum fill or I'm trying to make some money or trying to claim some success vis-à-vis Ozzy. I'm not; I've had plenty of my own success with QUIET RIOT and many of the other artists [I've played with]. There is no controversy, but I'm not going to sit here and deny what I know to be the truth. I played the riff; it's as simple as that.

"At the end of the day, does it really matter? I'm not more famous for it, and I didn't make money off of it; Lee Kerslake is not more famous for it, and I'm sure he didn't make any money for it, either… I'm more well-known for the intro to 'Bang Your Head', 'The Wild & The Young' and 'Cum On Feel The Noize' that I am for anything else, so it's not like I need any extra pats on the back… It's a triplet that John Bonham used that he actually got from famous jazz drummer Max Roach. At the end of the day, it's so derivative that does it really matter?"

The complete feature is available at this location.

"Diary Of A Madman" is the last Osbourne studio album to feature Rhoads and Kerslake. An altered version appeared in 2002 with the original bass and drum parts removed and re-recorded. In 2011, a deluxe thirtieth-anniversary edition was released with all original parts restored. To date, the album has sold over three million copies worldwide.