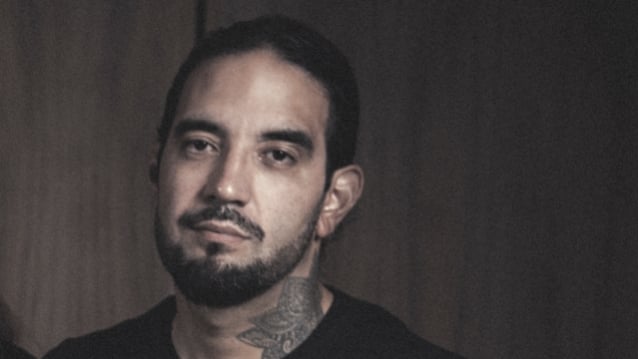 Martin: "I think that while recording, it was pretty much as we always do. But when we had the finished product, we really felt that it's a really strong album. It's the first album where actually the vision we had for the sound and for the image of the band, it reached the goal that we had. We feel it's our strongest album. Yeah, things are happening, which means that it's a good one."

On whether he feels SOEN has created its own "signature sound" and has moved away from its influences on "Lotus":

Martin: "It's a hard one. We are our influences. Everything that you hear kind of stays in your mind and later on when you write music, it just comes out. I guess that this album shows more the strength of us as a group. I think the more music you write, you start understanding what each member of the band can do to make the music better. That is maybe the big difference here, that we are actually writing every part so that every guy gets to do their best."

On whether the negative reaction to the band's video for "Martyrs" showing men dressed in drag shows that the metal community is not as open-minded as it seems:

Martin: "I think that the metal community, or the metal scene, and this is the thing you cannot… I think the metal scene, as a whole, as a scene, not as individuals, because all my friends are metalheads, my wife is a metalhead, and I feel that at least the friends that I have, we all agree on that the metal scene is really far behind when it comes to social issues like that. It's not about having an agenda or a following the mainstream trend of social justice or whatever; it's just fucking common sense. I think that we still follow in the rules that we had in the '80s when back in the day when I started listening to metal when SLAYER released 'South Of Heaven', being Satanic was something that actually went against society. It was a thing. It was not accepted. It was part of a rebellious [spirit]. It's not anymore; nobody cares. But we are still kind of following those rebellious things and thinking that is cool and has some value. I don't think it is anymore. I guess as an art form, it's something important and that you get to do whatever you want, but I think in metal, the lyrical value is not there anymore. I think that for us older metalheads that have such extensive careers that we kind of need to say something. We need to fucking talk about something of value because the younger generation, the younger metal generations, who are actually listening to us, they listen to our lyrics, they are reading this is our time to actually get to say something what we have learned through the experience of age."

On the lack of reaction to the band's video for "Covenant", which addresses the sexual abuse issues currently plaguing the Catholic Church:

Martin: "The weird thing is that when you compare those videos, nobody really said anything about the 'Covenant' video, but everybody really reacted because of the 'Martyrs' video, and that shows you how fucked up it is, that you can have a video about pedophilia, or any death metal band can have a video about killing, rape, or whatever — nobody reacts. Then you have five guys dressed as women, everyone freaks out. It just shows what's wrong with the metal scene. We accept violence. We are completely numb to violence. I don't get it."

Martin: "This is my first proper album. For me, this is only great, beautiful memories. I was really accepted by these guys into the band. This was a few months after I came to Sweden and I couldn't speak English or Swedish — I couldn't communicate with them. I just spoke Spanish. I could play the drums and they really took care of me. I didn't have a job. They got me food and really helped me a lot. This is a band that I will always be thankful to. I love this album."

On whether he thought AMON AMARTH would ever get so popular:

Martin: "I really trusted them being big. The guitar player [Olavi Mikkonen], has such a drive. They're such a great live band. They're really smart in doing what they can do as best as they can. I really had high hopes."

Martin: "This is also a fantastic album. I think it was maybe my happiest time in OPETH. It's the album where I felt that things could take off, and they actually did. It was just that magical period when you go from playing to a hundred to maybe a thousand. It's also beautiful memories."