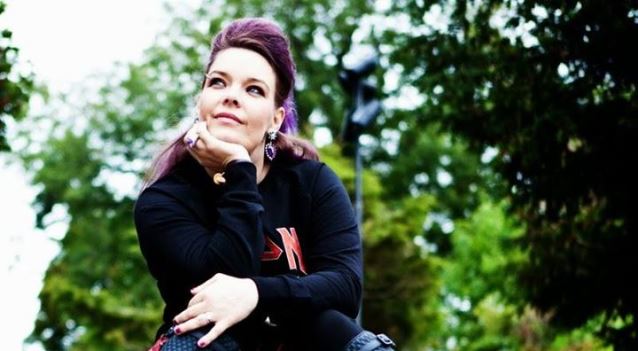 Dark Sirens recently conducted an interview with former NIGHTWISH singer Anette Olzon. A couple of excerpts from the chat follow below.

Dark Sirens: Now that you're on your own, have you received invitations from new bands to join them? Or would you like to create a new band?

Anette: I get invitations from different projects all the time, but so far, I haven't found any of them suitable for me.

Dark Sirens: What are your plans musically?

Anette: Some plans are still secret, but my solo album will be out next year.

Dark Sirens: How is the process of writing your new album? Will it be a personal album or have a concept?

Anette: It's a personal album and the songs are written mostly in 2009 but also some are done now. I write quite sad songs and I guess it's because I'm like the clowns who look happy on the outside but have a lot of sorrow and hurt on the inside. Things that have been painful in the past is easy to use in my lyrics.

Dark Sirens: What will be the genre of this new music?

Anette: Hard to say a genre since there's so many different songs.

Dark Sirens: What do you think about the duet between [former NIGHTWISH singer] Tarja [Turunen] and [WITHIN TEMPTATION frontwoman] Sharon [Den Adel on the new WITHIN TEMPTATION single, "Paradise (What About Us?)"]?

Anette: I think it's great and the song is catchy and fun. Both ladies are amazing singers, so can't be anything other than a hit!

Dark Sirens: Would you like to do a duet with Tarja?

Anette: Yes, that would be fun.

Dark Sirens: What do you think about the drama that is happening to Carly Smithson, singer from WE ARE THE FALLEN, when people compared her with Amy Lee from EVANESCENCE? You've been in that situation where people criticized. What would you say to those fans who criticize without knowing anything about Carly's music?

Anette: I think the whole comparison between singers is a bit sad, 'cause everyone is good in their own way and should be appreciated for their talent. I understand some fans who can feel disappointed in singer changes, but there's a difference in being sad about it and then to hate and spit out their frustration in YouTube and other forums. If you don't like the new singer, listen to the old singer's albums and move along. Do not give innocent people hate they do not deserve.

Dark Sirens: Do you think that [the new NIGHTWISH singer] Floor Jansen will go through the same situation as you and Tarja?

Anette: She might have to do that, but after knowing our situations, I guess she also has the choice of not taking the job so she has the power still to choose.

Dark Sirens: Having been so criticized and despised by many fans for not have a lyrical voice, how does it feel to know that there are many fans who miss your voice and want your solo album?

Anette: That's so nice and there's a lot of fans who liked my voice in NIGHTWISH, but they aren't the ones who write in the Internet. We sold so many albums of 'Dark Passion Play", which only proves I was liked by many, so I am happy I'm gonna release my solo for those who liked my voice. There are so much more to show people than I've done so far.