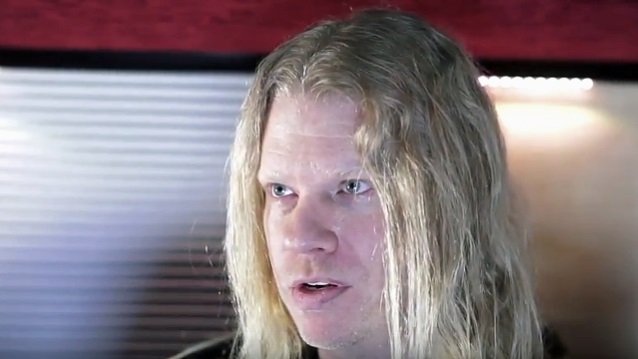 Speaking about the recent passing of NEVERMORE singer Warrel Dane, Loomis said: "It's a sad situation with one of my best friends that I grew up being in a band with. [He was] one of the best lyricists in metal, I believe, that was ever out there — a fabulous person. He was a troubled person too at the same time; he had some issues. We had many great times together in the past, and we had many bad times, but I would say that the good times outweighed the bad. And in the end, we were talking still as friends, and we talked in the end before he passed away. We were on good terms. It's a very sad loss to the music community and he'll be well remembered as one of the great vocalists of a metal era."

Loomis added that Warrel had been "struggling with drinking and things like this" for years before he died. "I'm not getting into too much detail there," he said. "He had some troubles. I'm gonna miss him a lot. He was a great friend of mine and he was a wonderful human being."

Asked if there was any talk of a NEVERMORE reunion before Warrel passed away, Jeff said: "I think that once you do something for such a long time and you make your mark in the music world, sometimes things do have to come to an end. And, unfortunately, with my situation with NEVERMORE, after 18 years of being in the band, it marked kind of an end of an area. And for me personally, it was kind of moving on to another chapter in my life. There was talks, like maybe a year, a year and a half ago about maybe doing a reunion show, but it never happened, of course. Obviously, now it's not going to happen."

Dane died on December 13 in São Paulo, Brazil at the age of 56. The musician reportedly had a heart attack during the night and could not be revived.

According to guitarist Johnny Moraes, who played in Warrel's solo band, Dane had a history of addiction and other health issues. "His health was already very weak because of his diabetes and his problems with alcoholism," he said.

The instrumental parts for Dane's follow-up to 2008's "Praises To The War Machine" solo album were almost completed and he had begun laying down his vocals shortly before his death.

NEVERMORE effectively split up in 2011 when Loomis and drummer Van Williams announced their departure from the band due to personal differences with Dane and bassist Jim Sheppard. Warrel later described NEVERMORE in an interview as "the greatest band that alcohol ever ruined."