LOWA, the new band featuring ex-GRIP INC./ HEATHEN bassist Jason VieBrooks and former FORBIDDEN/MANMADEGOD drummer Steve Jacobs, has parted ways with former MORBID ANGEL bassist/vocalist Steve Tucker. According to a posting on the LOWA MySpace page, "Steve Tucker has decided that this was the right time to 'retire from music.'" The band adds, "Typically this is where the guys that are carrying on would say, 'We wish him the best of luck.' You won't hear that here because that would be a lie. . . We are currently looking for his replacement and a [band] name change will finally happen so we'll keep you posted."

Singers that are interested in applying for the vocalist position can contact the group via the LOWA MySpace page.

LOWA with Steve Tucker (second from left) in happier days: 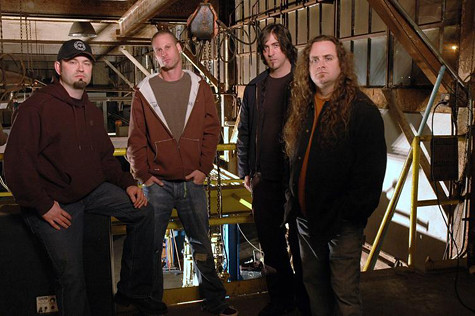