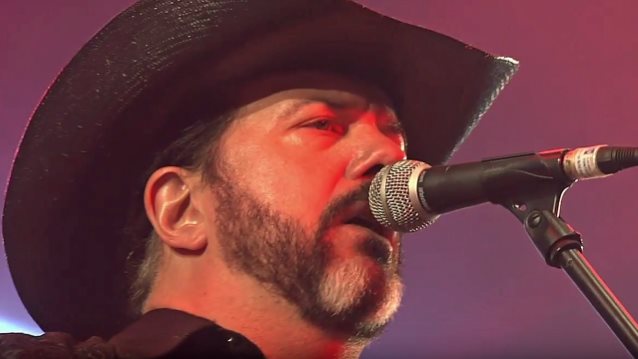 Former MORBID ANGEL and current I AM MORBID/HEADCAT frontman David Vincent was interviewed on a recent installment of the "Talk Toomey" podcast. You can now listen to the chat using the audio player below. A couple of excerpts follow (transcribed by BLABBERMOUTH.NET).

On his country music career:

Vincent: "I recognize that it's not everyone's cup of tea. I didn't think that it was gonna be an easy [transition], 'Well, we're just gonna move from one thing to another.' 'Cause I really haven't. I'm still… I'm a metal guy — always will be. But some of these other things that I'm taking part in are things that I've wanted to do for some time. My mom is really tickled about it. She wasn't really a fan of the metal stuff to begin with. So I finally get a little bit of approval on that end."

On how he came to join HEADCAT as the replacement for late MOTÖRHEAD frontman Lemmy Kilmister:

"Well, my partner in the country thing is actually the guitar player for HEADCAT [Danny B. Harvey]. So as we've been working on music and playing together, he asked me if it would be something that I was interested in. And I met with he and Slim Jim [Phantom, drums], and they thought that, 'Let's give it a try.' So we went in and we recorded a few songs and we have a few shows under our belt now and things seem to be going pretty well, we all get along real well. And, of course, back in my younger days, THE STRAY CATS was one of the bands that was on my list of things that I listened to, so it's really cool to be able to perform with Slim Jim. He's the first drummer I've ever played with that does not use a drum throne. It's fun. Playing with people that are that seasoned, and a lot of stuff we just read each other onstage as opposed to… We work things out or we say, 'Well, here's a basic setlist,' and then the songs change every time we play 'em, just because we're in the moment and we can do that. So that's really the antithesis of a lot of metal stuff that I've done where things are just very… it's exactly this way, and if it's not this way, it's wrong. So this is the opposite of that."

On whether playing rockabilly is more difficult than playing metal:

Vincent: "It's just different. That's the best way to put it — it's just very different. Roots rock is based on… it's coming from a completely different area than extreme metal is. I mean, Lemmy, if you talked with him, he would say, 'Well, it's all rock and roll.' And to some extent, yes, and to other extent, no. Really, it's all about if it's got emotion or not. And if I do it… I need to feel emotionally attached to anything I do; otherwise, I just don't wanna do it. So that's the first hurdle for me — finding a way that, 'Man, am I into this?' If I'm into it, then it's all guns blazing. If I'm not, it'll be a pass. Which is just being honest."

On whether he still enjoys performing MORBID ANGEL songs with I AM MORBID:

Vincent: "Well, of course. They're my children. I mean, just because the parents get divorced doesn't mean that you stop loving your kids. That's probably the biggest takeaway. I love everything I've been a part of. So how could I not love it?"

The new version of HEADCAT recently recorded a heartfelt and rockin' tribute to Lemmy, appropriately titled "Born To Lose, Live To Win". The song was released digitally worldwide on June 23 and was made available on a very limited-edition seven-inch single (only three hundred copies pressed). The seven-inch vinyl singles were available at the band's European shows this August, including at Wacken Open Air — where the band performed two sets throughout the weekend.