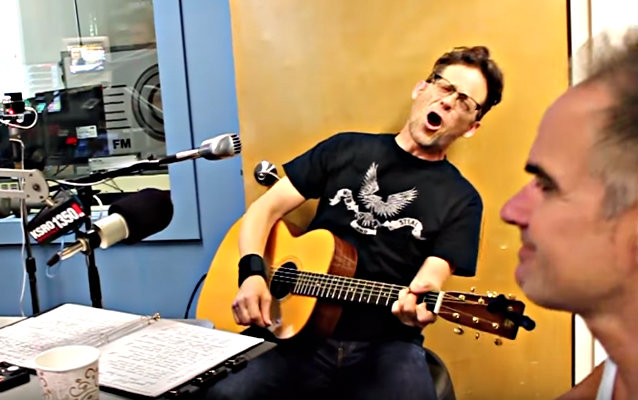 Video footage of former METALLICA bassist Jason Newsted and his CHOPHOUSE BAND (named after his four recording studio facilities around the U.S. and featuring a fluid roster of players) performing at the studios of KSRO 1350AM's "The Drive With Steve Jaxon" radio show can be seen below. The clips include Newsted's acoustic cover versions of John Prine's "Bear Creek Blues", Doug Seegers's "Down To The River" and Willie Nelson's "Roll Me Up And Smoke Me When I Die".

During an appearance on the August 29 edition of the SiriusXM satellite radio show "Eddie Trunk Live", Newsted explained how his mother's illness and eventual passing in March of this year inspired his current acoustic-based projects. He said: "What transpired was I had to keep playing, and she knows I had to keep playing. So I picked up the acoustic and started doing what I was able to do when I was just hanging around her, and started learning my cowboy chords and started collecting my songs. This was about the beginning of summer of 2014. So I would play certain songs for her, kind of choking through 'em — a bass player playing heavy handed on the acoustic guitar and just banging these cowboy chords out and learning Johnny Cash and Neil Young and George Jones and some more popular things like that. And by now, a couple of years later, I've dug in a lot deeper than that, but it was originally inspired by that thing, where I'd play mom songs. And she wouldn't necessarily remember, the next day or the next couple of days, which ones I'd played for her, and so she would react to certain songs the same way each time she heard them as if she was hearing them the first time. And so that kind of showed me which ones to chase, that showed me which ones had the groove, which ones my voice fit with, and all that. That's how I started collecting my songs. I had to keep playing music, of course, but the way and the form that it had to take was me with an acoustic, one voice, working through those songs as I had to put everything else on hold."

Asked how the CHOPHOUSE BAND grew into a live concept, Newsted told For Bass Players Only: "We'd all play together and do all these crazy songs — 'John Henry', CARTER FAMILY songs, Neil Young songs — and we'd do private keg parties with our buddies up the street. We'd take our Fender amps and load up the trucks and hack through the songs. Whoever wanted to be included could be included. We'd take hand drums, and people who weren't even necessarily musicians could be included. It was like a porch jam. And we did that for years, just our friends, and finally this year I decided we were going to start sharing it with more people — if they gave a crap. But we've been talking about it for a long time."

Regarding whether the CHOPHOUSE BAND will be a recording endeavor at some point, Newsted said: "I really haven't thought very seriously about it since most of the stuff is songs a lot of other people have [on] recording. There's a handful of originals, maybe a dozen, I've got together in this style. But I'm not ready to do any kind of recording with it. I'm kind of digging the idea that I just play it as much as I can and share it with people. The shows so far have only been 70 people or a couple hundred people, and it's people who want to be there. That's what I want. It's a grassroots vibe. We've been offered bigger shows for this from the agency; the initial offers were 700 people in a room, 900 people. That's not okay. We haven't earned that yet with this outfit. I want to build up the right way and earn it. I'm not in a hurry that way. I'm going to cherish every minute I do it, but I'm not going to hurry it up and ruin it."

Jason left METALLICA back in 2001 but was inducted into the Rock And Roll Hall Of Fame, along with Ulrich, guitarist/vocalist James Hetfield, guitarist Kirk Hammett, and the man who replaced him, bassist Robert Trujillo, in 2009.