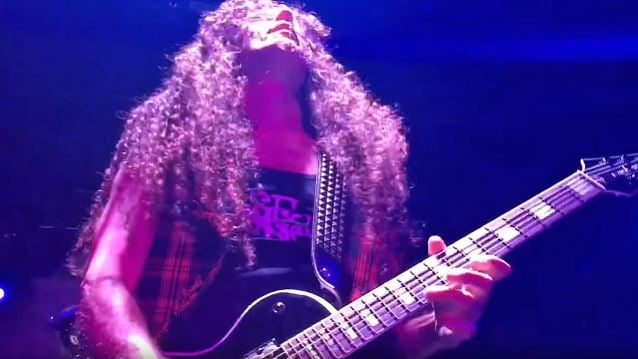 MEGADETH leader Dave Mustaine said in a recent interview that a planned reunion of the band's "Rust In Peace" lineup — featuring Friedman and drummer Nick Menza — in early 2015 failed to materialize for a number of reasons, including a difference in vision for the group's new music. He said: "Marty had sent some e-mails saying, 'Oh, man, you know, the fans have this self-inflated importance of 'Rust In Peace' beyond what it really is. And I was, like, 'Huh?' So I didn't know if that was a backhand to the face of the fans or not, but he had basically said that if we were gonna do anything, it had to be better than 'Rust In Peace'. And he sent me over some links to some songs that he thought should be the direction that we were going in, and one of it was this J-Pop band with some Japanese girl singing, and I was, like, 'Uh-uh. This ain't gonna work.' More power to [Marty for being into that stuff]. Do what you want, Marty. He's a great guitar player. But I'm not gonna sing like a Japanese girl."

Friedman's critically acclaimed 2014 solo album, "Inferno", sold around 2,100 copies in the United States in its first week of release to debut at position No. 186 on The Billboard 200 chart. The CD was the 53-year-old musician's first collection of material recorded for the U.S. market since 2003's "Music For Speeding". Among the guest collaborators that appear on the effort are CHILDREN OF BODOM's Alexi Laiho, REVOCATION's Dave Davidson, acoustic flamenco-metal hybridists RODRIGO Y GABRIELA and Friedman's pre-MEGADETH bandmate in CACOPHONY, Jason Becker.