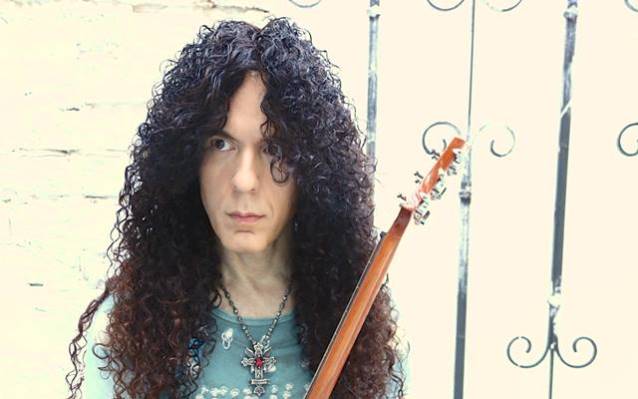 "Steroidhead", a brand new solo track from guitarist Marty Friedman — whose groundbreaking work with MEGADETH, CACOPHONY and as a solo artist has influenced legions of players around the globe — can be streamed in the YouTube clip below. The song is taken from Friedman's new studio album, "Inferno", which will be released in May via Prosthetic Records.

"Each track on the album has a separate dream team on it, so it feels like a constant barrage of fresh interpretations of my music."

As Guitar World recently revealed in an exclusive in-studio feature, "Inferno" will include several collaborations with players influenced by Friedman, including Alexi Laiho (CHILDREN OF BODOM), REVOCATION guitar whiz David Davidson and the flamenco/metal acoustic duo RODRIGO Y GABRIELA. In addition, the album includes Friedman's first songwriting collaboration with Jason Becker since the pair played together in the pioneering duo of guitar mayhem CACOPHONY.

"On the guests' songs, each would write a song from scratch, and then I would arrange it and add my parts to it," Friedman said. "That way, we were both invested in it, and it’s a little bit of a deeper experience than just banging out a guest solo."

Just as he changed the game in the worlds of metal and guitar once before with his revered solo debut "Dragon's Kiss", Friedman now raises the bar to a new level for a new generation with "Inferno".