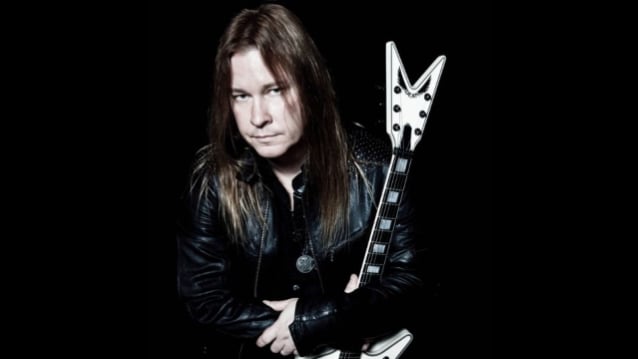 Canadian guitarist Glen Drover (MEGADETH, KING DIAMOND) was recently interviewed by The Metal Voice. You can now listen to the chat below. A couple of excerpts follow (transcribed by BLABBERMOUTH.NET).

On how he feels about MEGADETH's "United Abomination" album, more than a decade after its 2007 release:

Glen: "I think it came out really well. It's a very strong album. There's songs on there that I favor more than others. But, saying that, I think it's all great. The whole album is a really good, cohesive package, and it was a lot of fun to record it. My preference, listening to MEGADETH albums, would be those first three, especially 'So Far, So Good' and 'Peace Sells'. But, saying that, there's a lot of songs I do like on it. There's certain ones that didn't do a whole lot for me, but that's just my opinion, which is what we want. We want people to have their own opinions and have them all different. That's what makes the world go around."

On MEGADETH leader Dave Mustaine's comment that he would sing the melodies for the solos to the various MEGADETH guitarists in the studio while they were being recorded:

Glen: "That was kind of taken to a weird place. He had said that, but I think the problem was Dave didn't really specify. So it made it sound like he literally sang all the notes. But that's not what it was. Like, for example, for me… I can really only speak for me, but I know it was kind of the same idea with the rest of them… I remember doing this one solo in the first song, [which] is called 'Sleepwalker'. That wasn't gonna make the album. Thank God it did, because it's pretty much one of the very few uptempo tracks. Too many of the songs were just midtempo, a little bit more laid back, and we needed something that was gonna be more of a faster, hit-you-in-the-head type of song. And Dave didn't wanna do it. And in the end, what happened was me and [producer] Andy Sneap did a demo of it and sent it to the record company. And they were, like, 'Yeah, we're using this one.' So I guess Dave was overpowered on that. Sorry, Dave. But I think that's how the story went."

On what it was like working with Dave in the studio:

Glen: "I got along with him really well. He wasn't a taskmaster with me — you know, 'Do this five thousand times over.' I did my homework so much that he really didn't question a whole lot. And when it came to solos, I'd do something. He goes, 'Why don't you try something like this?' And always, the idea he would come… Going back to that whole thing about the singing of the solos. He's not singing all the notes. He kind of mimicked the actual flow of it, the tempo of it. And it was kind of like that. I remember in 'Sleepwalker', the first solo, the original solo I did was, like, twice as fast. He's, like, 'Yeah, it's good, but why don't we use something where it's a little bit more slower-paced and it's more memorable.' And I'm, like, 'Okay.' And then he went [hums guitar melody pattern]. And that's what he did. I'm, like, 'Okay.' And that's what we did. I worked on that, got all the choice notes, and there you go. And that made the album. So it was actually a really good working atmosphere. I did most of my solos, actually, at Andy's studio in the U.K. And it was just me, Dave and Andy in the studio at that point. We just flew in. All the other guys had already finished their stuff. The drums were done. 'Cause we recorded, actually, at four or five different studios."

Drover handled all guitars and keyboards on the album, while the drums were tracked by Scott Barrymore and bass by Chris Myles (except the songs "Discordia" and "Tarnished Dream", which feature bass by Joe DiBiase). All music was recorded, produced and engineered by Drover at Eclipse Recording in Windsor, Ontario, Canada.