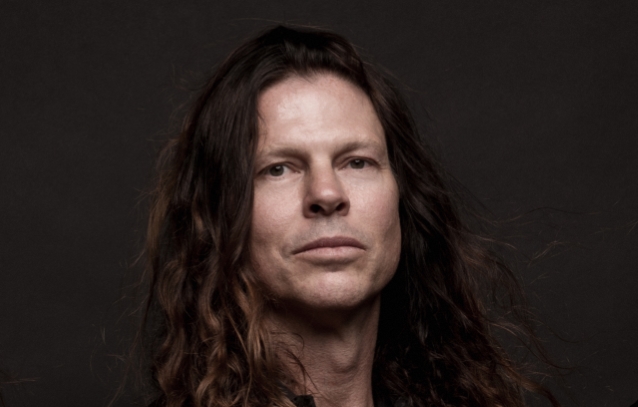 Former MEGADETH and current ACT OF DEFIANCE guitarist Chris Broderick says that it was "a huge honor" to take part in a special tribute to late PANTERA and HELLYEAH drummer Vinnie Paul Abbott on Saturday, October 13 at the Aftershock festival in Sacramento, California. Joining Broderick for a cover of the PANTERA classic "A New Level" were Kyle Sanders (bass) from HELLYEAH, Eddie Veliz (guitar) and Pepe Clarke (drums) from KYNG, and SiriusXM's Jose Mangin on vocals.

Broderick told MA Entertainment Global that he only played "A New Level" at the event because he "kind of came in late in the game. I heard about the tribute — I heard whispers in the wind," he explained (see video below). "And I was, like, 'Man, I've gotta be a part of that.'"

Although Broderick never got a chance to meet Vinnie Paul's brother, late PANTERA guitarist "Dimebag" Darrell Abbott, he says, "I honestly really feel like I know him from all of those [PANTERA home] videos — '[3 Vulgar] Videos From Hell' and all the fucking antics that they did," he said. "To me, it was so outlandish. And then I had to think to myself: 'How the hell can they play their instruments so well when they're doing that?' It just was beyond me. [Dimebag] killed it every night."

Broderick went on to say that he became a fan of PANTERA while he was in his early 20s in Colorado. "I hadn't heard of them before [1990's] 'Cowboys From Hell', but once I heard 'Cowboys From Hell', I was sold," he said. "And then, when I saw them at Red Rocks when I was in Denver growing up, I was, like, sold for life.

Also paying tribute to Vinnie Paul at Aftershock were members of KORN, GODSMACK, DEFTONES, SEVENDUST, SHINEDOWN and GWAR, among others.

Vinnie Paul died on June 22 of dilated cardiomyopathy, an enlarged heart, as well as severe coronary artery disease. His death was the result of chronic weakening of the heart muscle — basically meaning his heart couldn't pump blood as well as a healthy heart.

Vinnie Paul was buried on June 30 next to his brother and their mother, Carolyn, at Moore Memorial Gardens cemetery in Arlington, Texas.