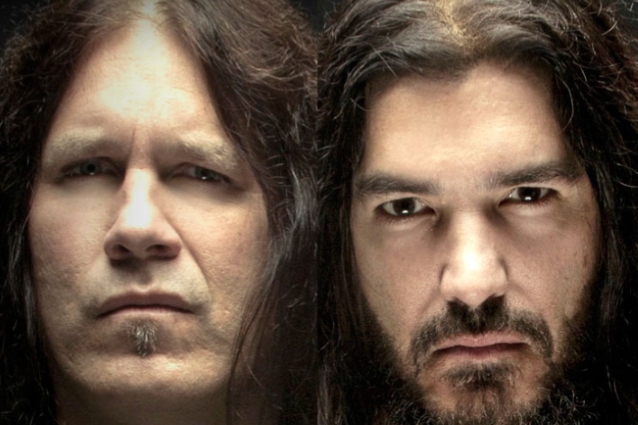 During an appearance on the latest episode of Dean Delray's "Let There Be Talk" podcast, former MACHINE HEAD guitarist Phil Demmel was asked if he has been in contact with the band's frontman, fellow San Francisco Bay Area resident Robb Flynn, while all of us have been forced to limit our in-person interactions due to the ongoing coronavirus pandemic. He responded (hear audio below): "I haven't talked to him pretty much since the end [of my time with the group]… I don't have any desire or need to talk to him ever again."

In 2019, Demmel told the "In The Pitts Of Metal And Motor Chaos" podcast that MACHINE HEAD ended up becoming a Robb Flynn solo project toward the end of his time with the group. "We weren't a band," he said. "That was Robb's trip, and we were basically just being told what was gonna happen… Everything had changed over time. Shit, we were together for 16 years and stuff changes after that. It's been the band that he started. So things shift, and as they weren't what we agreed to or what we wanted to be a part of, [drummer Dave McClain and I] just left. So we do our own thing, and [Robb] does his thing." Demmel also said that the musical side of MACHINE HEAD took a sharp turn for the worse during the writing stage for 2018's "Catharsis", an album he said he hated.

Demmel told SiriusXM's Liquid Metal that there were "a lot of things" that he couldn't do while he was a member of MACHINE HEAD, including speak to the press. "There was a point where we were taking liberties and still doing [interviews]," Phil said. "It got to be where the talks that came along with it, it was unbearable. It was just like, 'Man, I'm punching the clock here. I'm gonna show up. What songs do you wanna play? Okay. Cool. We're gonna play the songs. When are the dates? Okay. Cool.' For the last cycle, it was the paycheck. That was my living. I didn't like my job anymore."

Phil also revealed that he decided to quit MACHINE HEAD after spending "many stressed-out nights" talking with his wife and occasionally "losing sleep" over everything that was going on with the band. "And it just got to the point to where I [couldn't] do this anymore," he explained. "It's unhealthy for me physically, it's totally unhealthy for me mentally, and it's taking its toll on my family now, and there's where I've gotta draw the line," he said. "This isn't fun, and I've gotta quit my job. And there was a straw that broke the camel's back."

Demmel announced his exit from MACHINE HEAD in October 2018, explaining at the time that he wanted "to step away and do something else musically." Phil, who first played with Robb in VIO-LENCE in the late 1980s and early 1990s, went on to complete MACHINE HEAD's "Freaks & Zeroes Tour" before officially leaving the band.

Demmel spent most of 2019 and early 2020 playing sporadic shows with the reunited VIO-LENCE, which recently inked a deal with Metal Blade Records. The band's new EP — featuring the first all-new VIO-LENCE music in more than three decades — is currently being recorded for a tentative late 2021 release.

Although Flynn was part of VIO-LENCE's classic incarnation and played on the band's debut album, "Eternal Nightmare", he wasn't approached about taking part in any of the comeback shows.