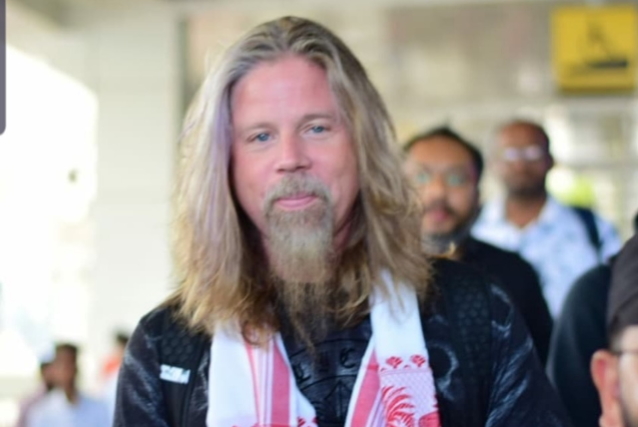 Earlier this month, former LAMB OF GOD drummer Chris Adler returned to India to conduct a series of drum and music-business clinics and live shows titled "The Chris Adler Experience", presented by Gravity Talent. The live shows saw Adler supported by a number of the country's top musicians belting out the best-known LAMB OF GOD and MEGADETH material.

Adler has since sent the following recap of the experience to BLABBERMOUTH.NET:

"I've just returned home from my 5th trip through India and Nepal and while I'm certainly glad to be home, I had yet another incredible experience.

"As might be expected, I think about the metal genre a lot as well as the next generation of musicians. I see so many talented artists get passed by, mismanaged and broken by the cycle of the industry. Some even giving up playing instruments all together.

"I look at my kids and hear what they are listening to and have witnessed 'studio magic.'

"Today there are more enhancing computerized components and add-ons than real musicians. That kind of freaks me out.

"Guitar Center files for bankruptcy after 60 years. Mars, Inc. the same. Best Buy removed their instruments. Mom-and-pop shops are almost all gone. Schools continue to ditch their music programs (not their fault, I understand school board budgets all too well). Sam Ash is holding on, but I can't imagine it looks pretty considering the previously noted. Vintage shops are thriving, but their demographic is collectors over 40.

"Where can I put a guitar in my kids' hand without a return label from Amazon?

"It's disappointing to me to see it go away. Music is such a huge part of me.

"My clinics give me the opportunity to inspire musicianship…on many levels. I share my musical accomplishments and struggles — and attendees often share theirs with me. Along the way, I have met very talented up and coming musicians.

"It feels great to see and know that I'm doing a part in continuing to inspire them to play and experiment with music. It's also humbling to be inspired by them and their push to be creative in difficult situations. We learn and inspire together, and I am thankful for the opportunity.

"This tour also provided me a chance to let some incredible musicians shine.

"The whole idea was that this was not going to be about me. I know I can add something to any project as I have so many creative ideas (not just metal) spilling out of my brain. It's about collaborating and having fun. To that point I've done clinics in my daughter's pre-school and elementary schools — no fee taken or required. Let's have some fun and hopefully inspire.

"This particular tour in India and Nepal ties to another amazing band that I recorded with in India. Have a listen to THAIKKUDAM BRIDGE. Their album will release on Nov. 30. I am so humbled to have infused my creative brain with their incredible talents as a group and including Guthrie Govan!

"When LAMB OF GOD first travelled to India, I insisted with the festival promoter to include a relatively unknown band SKYHARBOR to open the show. They killed it and continue to do so all around the world. Heard of KRYPTOS yet? SCRIBE?

"On this most recent trip, meeting and jamming with the guys from GATC was a thrill. So much so that new recording sessions have already come from it with Girish, includes my good friends Myrone and James Lomenzo. I'll have more info on that soon. It's exciting, heavy and absolutely fun.

"Coming back now for my 5th time I'm fairly entrenched in the Indian metal scene and am impressed beyond words. My trip showed me a sweeping sea of colors once again and I'm fortunate to be able to experience it and share it.