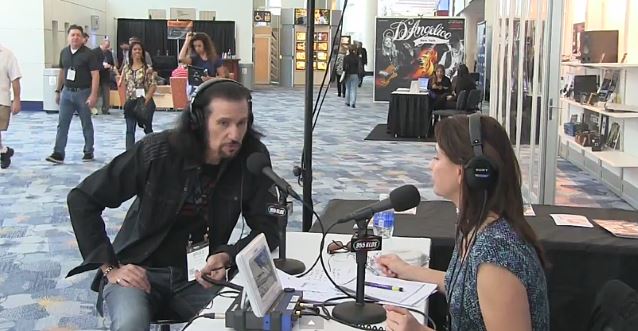 Frankie DiVita of the 95.5 KLOS radio station conducted an interview with former KISS and current GRAND FUNK RAILROAD guitarist Bruce Kulick at this year's NAMM show, which took place January 22-25 at the Anaheim Convention Center in Anaheim, California. You can now watch the chat below.

Speaking about his decision to marry girlfriend Lisa Lane in Janaury 2014, Kulick said: "I had that kind of typical, I'll call it the 'trophy wife,' during the KISS years. And that worked for a little while, until we divorced right around when the KISS thing ended — unrelated, of course, actually, I will say. But it took fifteen years to find the right one and get married. And Lisa Lane is that. She's a beautiful singer, but not, like, rock, even though she can kind of do that. We just put the song that we did our first dance at at our wedding a year ago up on our anniversary. It's called 'I Dreamed Of You'. And [it's billed as] 'Lisa Lane' — like 'Lois Lane' but 'Lisa Lane' — 'featuring Bruce Kulick.' And it's like, jazz. It's a trio. And she's got a voice [that makes] everybody go, 'That's you?' I mean, I cry when she sings. She just has such a beautiful voice. [I'm] very proud of her."

In 1984, Bruce joined KISS, where he remained as their lead guitarist for twelve years, accompanying the band on the "Animalize" tour and continuing with the band until the 1996 reunion tour. Bruce is heavily featured on "Kissology – Vol. 2" and "Vol. 3", the band's DVDs spanning their historic 35-year career.

Kulick's third solo album, "BK3", was released in Europe in January 2010 via Frontiers Records and in North America in February 2010 through Twenty 4 Records/Rocket Science Ventures. The first single from the album, "Hand Of The King", featuring Nick Simmons (son of KISS bassist/vocalist Gene Simmons), was a digital-only release available at all online music stores, including iTunes.