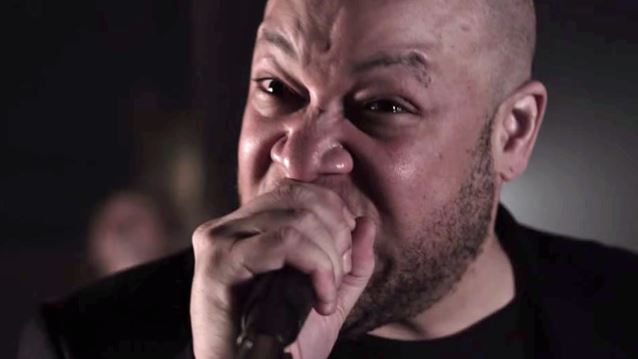 Former KILLSWITCH ENGAGE singer Howard Jones has revealed that he came close to committing suicide three years before he was fired from the band.

Jones — who is now fronting a new outfit called DEVIL YOU KNOW — had a difficult time accepting his newfound fame as a member of KILLSWITCH ENGAGE due to depression and anxiety disorders that he has battled since he was a child. "It came to the point where I was, like, 'I don't know how much more of this I can take,'" Howard said during an appearance on on the latest installment of HATEBREED frontman Jamey Jasta's official podcast, "The Jasta Show" (hear audio below). "It just became overwhelming for me. And I've had anxiety and depression since I was a young teenager, and being a singer and doing what I do did not help. And then, actually, having the blessing and luck to get known and actually have success doing it, I mean, I'll always be grateful for it. But, yeah, it became just an absolute burden for me."

According to Jones, his anxiety was so severe during his teenage years that "I would be walking down the street, and there would be people walking towards me, and I would walk across the street just to avoid them. As a teenager I did that. And, so, you can imagine how it became once there was people yelling my name and everything. I couldn't go to grocery stores, I couldn't go to the mall. I would get stared in movie theaters. And most of the time, they made it known that they knew who I was."

KILLSWITCH ENGAGE's rise to fame in the first few years after Jones joined the band only triggered and fueled his anxiety disorder. He explained: "It went from, like, 'Wow, this has turned into something.' And then, it went from being an underground thing that… it was a small community, it was the thing that we shared together, [and then] it went to, like, this big public thing. And, so, yeah, then after a while, it just got to the point where I was, like, 'Man, I can't handle this.' So [when you're sitting there] just alone, your mind just goes crazy. I mean, at least it did for me. And there's some people that have handled it a lot better than I did. Me, I did not handle it well."

Jones recalled one particularly bad episode that occurred in 2009 while he was still a member of KILLSWITCH ENGAGE. "I remember… [I was] still living in my old, old apartment [in Connecticut] and just… I don't even know if I've ever actually really talked about this. Yeah, someone knew what I doing and called the police, 'cause I almost blew my head off. I pulled out my .44. I loaded it. I was done. If they hadn't knocked on the door, I was gone…. The cops came and broke down my door and stopped me. So, needless to say, I ended up spending a little bit of time in one of the fabled mental institutions. I've never publicly talked about that."

Howard also spoke about the circumstances that led to his exit from KILLSWITCH ENGAGE just as the band was preparing to begin work on the CD that became 2013's "Disarm The Descent". "Basically, we got together, started going over ideas for the next album," he said. "We got together at Adam's [Dutkiewicz, guitar] place, and everyone was, like, 'Yeah, I wrote this stuff, wrote this stuff. I'm going through stuff.' And then started going through, just like, all the old music and everything. And I'm, like, 'We'll just meet up for the next week or two. We'll just meet up at the same time every day.' It was, like, 'Cool. See everybody tomorrow.' I just never came back. Actually, I drove away and just… I didn't call. I didn't return. Nothing. And I spoke to 'em, like, maybe two weeks later — something like that — and they were, like, 'So, yeah. So we figure we're just gonna move on without you.' And I was, like, 'I'll still do it. I'm just… I'm just having a hard time with this.' And they were, like, 'Dude, you hate this.' I was, like, 'It's not that I hate it.' And they were, like, 'You hate this.' [And I was, like] 'Yeah, I do. I can't stand this right now. This is just the worst thing in the world.' Like, I'd wake up and it's just… It's, like, something that I've always loved doing, I hated. And I was, like, 'You're right. I can't do this.' And, yeah, that was it."

Jones's near suicide and battle with depression served as the inspiration for the DEVIL YOU KNOW song "As Bright As The Darkness", for which the band released a video this past March (see below). Howard said: "Basically, it was just me, for two years, just sitting alone. And, I mean, I didn't… That was when I shut off my phone, I stopped talking to everyone… I cut off all of my friends. I spoke to no one. I literally spoke to no one."

According to Jones, he got himself to a much better place with therapy and some self-help techniques, making the experience of touring with his new band a lot more enjoyable.

"Dude, it was kind of refreshing," Howard said about DEVIL YOU KNOW's 2014 road work. "Even now, we're starting to talk about what we're gonna do here, upcoming [tour dates], and I was just, like, 'Wow, I can't believe I'm actually excited about this.' Yeah, I'll definitely bitch about it a bit once we get on the road, because such is my nature."

Jones admitted that there were things about the touring lifestyle that he definitely missed in the years following his departure from KILLSWITCH ENGAGE. He said: "There's parts of it that are just… It bonds you to the guys that you're with. It's amazing. I mean, there's just little things. I mean, the funniest stuff in the world happens when you're on the road and you're just in a confined area with a group of dudes that you're friends with, and it becomes just an amazing memory. And so, yeah, it's really cool. For me, it's just, like… It's almost like being a kid again."

DEVIL YOU KNOW is currently recording its sophomore album with renowned producer Josh Wilbur (LAMB OF GOD, ALL THAT REMAINS, KILLER BE KILLED) for a late 2015 release via Nuclear Blast Entertainment.