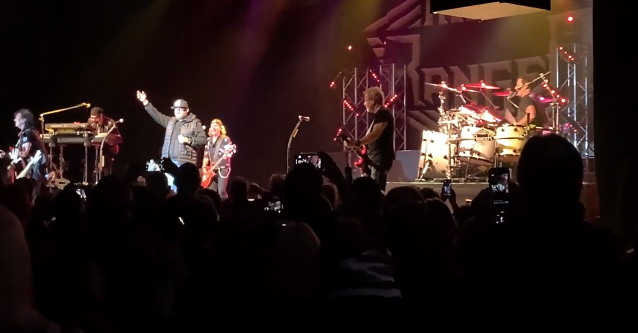 Earlier today, Owens took to his Twitter to write: "Really cool night last night, sat in with NIGHT RANGER and sang you've got another thing comin' Great seeing my buddy Keri and the guys, class acts!!! Leilani and I had a blast"

Owens joined PRIEST in 1996 after being discovered when the band's drummer was given a videotape of him performing with the PRIEST cover band BRITISH STEEL. JUDAS PRIEST at the time was seeking a replacement for Rob Halford, who has since rejoined the band.

"Well, the band needed Rob Halford, really," he said. "I joined JUDAS PRIEST in a horrible time in heavy metal — the mid-'90s. It wasn't very good. It started taking up in 2000, but it was too late for us.

"I've always said it this way: JUDAS PRIEST needed Rob Halford back and Rob needed to come back," he continued. "He needed JUDAS PRIEST. I mean, he can have a very successful solo career, he still co do his HALFORD thing. But money's doubled with JUDAS PRIEST and Rob Halford. So they needed each other.

"I mean, JUDAS PRIEST — if they got [original guitarist] K.K. [Downing] back... I love Richie [Faulkner, Downing's replacement], I wouldn't ever want Richie to go anywhere, but if they had that lineup back and they did a big tour, it probably would fetch more money as well."

Really cool night last night, sat in with Night Ranger and sang you’ve got another thing comin’ Great seeing my buddy Keri and the guys, class acts!!! Leilani and I had a blast ? https://t.co/N1n2dbwu4m