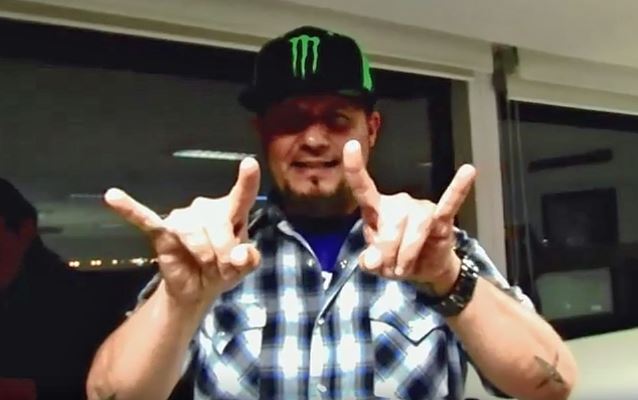 Former JUDAS PRIEST singer Tim "Ripper" Owens has weighed in on the 2016 presidential race, saying that controversial Republican candidate Donald Trump might be what America needs to move the country forward.

Owens, who revealed in a 2012 interview that he was voting for Mitt Romney in that year's election, made his comments on September 27 during a press conference in Mexico City. Asked for his opinion of the real estate mogul, the vocalist said: "Well, unfortunately, with the state of America right now, everybody's looking for somebody different, you know — somebody who will not be afraid to say something, to voice their opinion. Even though Donald Trump's an ass, he might be the ass that America needs, because Hillary Clinton sure isn't. Unfortunately, it's Hillary Clinton and Donald Trump. How could that even happen? But I'm not a Democrat and I'm not a Republican; I'm in the middle. And for my way of life, and being a businessman, I couldn't have Hillary Clinton in there; that's the problem. The way they tax people, I couldn't do it. But, you know, it's hard to say. I mean, they're both really bad. It's just we've had eight years of really bad right now. I shouldn't say that — the first four years of Obama was probably all right. The last four years have been… I mean, it's not very good right now."

He continued: "America is still the best place in the world to live. You know, I travel the world; America is the best place to live, in my opinion. But right now they have some troubles. And I think a lot of American people are just trying to figure out something other than what he [Obama] was doing for the last four years, and that's what she's [Hillary] gonna continue to do. So I think that's why people are going towards Trump.

"I've always said, why does the president have to be a Republican or a Democrat? Can't they just get a president who knows how to run things? I didn't think it would be Donald Trump. That's kind of… That's the problem. We'll see."

Tim's Akron, Ohio bar and restaurant Tim Owens' Travelers Tavern shut down for good on September 2 because he and his partner, Micah Posten, were no longer able to "commit the time and energy" to the business that it deserved, Owens said in a statement.