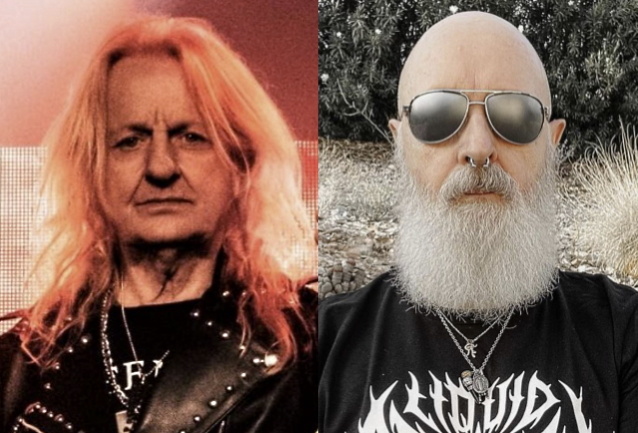 During an appearance on MACHINE HEAD frontman Robb Flynn's "No Fuckin' Regrets With Robb Flynn" podcast, founding JUDAS PRIEST guitarist K.K. Downing confirmed that he, the other members of the group and PRIEST management knew about singer Rob Halford's sexuality and were accepting, although Rob at the time was advised to be discreet given the macho hetero nature of the metal world.

"We always knew Rob was gay," K.K. said (as transcribed by BLABBERMOUTH.NET). "Because the thing is back in the days — in the '60s and particularly early '70s, when everything was still kind of behind closed doors and stuff like that — people felt a bit more comfortable around us because we would hang around in groups and gangs and we would always know that that guy is different to us and that girl is different."

Downing went on to say that he was like many other musicians at the time who dipped their toes into the glittery waters of glam androgyny.

"I actually looked like a girl — let's be honest," he said. "When I was, like, 17 [or] 18, I had hair down to [my waist]. And I can remember being at a jukebox once in a bar, and I must have been 18, and this big trucker came up behind me and he put his hands underneath my arms to feel my boobs. I was, like, 'Excuse me, mate,' as best as I could. He groped what he thought was a girl. But pretty much everything was androgynous [in those days]."

According to K.K., Rob's sexuality didn't matter to him and the rest of PRIEST. "The main thing is… Obviously, to me, Rob being gay, apart from [having] a great voice, I thought Rob was gonna stay in the band forever, and he's obviously gonna be theatrical, he's gonna be obviously articulate with words — and he was; he was all of that," Downing said. "Sensitivities and all of that, and the showmanship — so all of these ingredients [were] great attributes to have as a frontman. And I proved to be right."

K.K. also touched upon the revelation in Halford's recent "Confess" autobiography that the singer spent much on his time on the road in the 1980s and early 1990s "cruising" for one-night stands in gay bars, public restrooms, and other gay meeting places. Asked by Flynn if he was aware that Rob was doing it, K.K. said: "Yeah. Absolutely. My eyes have seen a lot. [Laughs] Even in the mid-'70s, if you come off stage and Rob's in the shower with one of the crew and stuff doing things. I mean, it is what it is. You don't have to go in there until it's over and whatever. It is what it is. 'Cause Rob had to put up with lots of things from us. It's the same thing — no different… It's the same thing — fair's fair. We're all there in the van. We're ready to go. 'Okay. Where's fucking Dave? Okay. He's in there still with a girl. Somebody go and get him.' We need to go. We neeed to get to the gig or from the gig. And these things happen. It's rock and roll. A lot of things were put down to rock and roll because it was rock and roll in those days."

Elsewhere in the interview, Downing talked about Halford's efforts to maintain the image of heterosexuality in the media — most notably through PRIEST's studs-and-black leather biker outfits, which defined the look of the heavy metal genre for years to come — even while living a secret, double life as a closeted gay man.

"In all fairness to Rob, Rob was a team player," K.K. said. "He knows that his image and the way that he was in the day and everything, it appealed to guys [and] it appealed to girls. And he was cool with that. The same with me, because your audience is your audience. We had so many people that did have an awareness, obviously, back in the day. But we are entertainers and we're performers. But [we had] a great belief in the music and the image and just everything around it. I still had immense pride in Rob as a great frontman and entertainer and a great vocalist. And he played the part as well, equally, as we thought we did in the macho, macho that was JUDAS PRIEST. Because we'd done the outfit, the leather and the studs, and I think anything to do with anything else ancillary — sexuality or anything — was just not a part… it wasn't on the stage. In Rob's mind, maybe it was here and there, but, to us, it was so ferocious and full-on, delivering up this music in the way that we did it, to me, I felt so proud of all of the bandmates. Because we'd done the uniform, and it was unique at the time, and it was such a powerful feeling. 'Cause we were getting off on that, what we had. The audience could sense it, I think. And that's why we were never afraid to play with any band, because we had the uniform that nobody else could put on at the time."

In "Confess", which came out in September 2020, Halford detailed the struggle of being gay while writing about how he and his bandmates started attracting groupies as PRIEST became more commercially successful. "Well, I didn't," Halford clarified. "None of our fans knew that I was gay at this point, of course. If any misguided girls made a play for me, I could politely brush them off. But if I wanted some action on the road — and I really, really did — how the hell was I supposed to go about it? For straight blokes, the ritual was easy. They could invite a girl to come backstage. Would you like a drink? Would you like to come to our hotel? Would you like to see my room? I couldn't do any of that."

Halford continued: "If I fancied a guy in the crowd, how did I go about it? What were the chances of him being gay (or, if he was, of admitting it)? What if I got it wrong, made a misjudged pass and got a smack in the mouth? And, of course, the overriding fear that was to limit my existence for decades: What if it got out that I was gay, fans didn't want anything to do with a band fronted by a queer, and it killed JUDAS PRIEST stone dead? PRIEST was the most important thing in my life, and even if I were willing to sacrifice it for my sexuality — which I wasn't — I simply couldn't do it to Ken [K.K.], or Glenn [Tipton] or Ian [Hill]. It wouldn't be fair on them. It was my problem, not theirs."

Rob also wrote about how PRIEST came to adopt its iconic leather look, saying: "The biggest myth about this new stage gear is that I had somehow masterminded the image as a cover and a vent for my homosexuality — that I was getting a thrill from dressing on stage as I'd like to dress in the street, or the bedroom. This is utter bollocks. I had no interest in S&M, domination or the whole queer subcult of leather and chains. It just didn't do it for me. My sexual preference was for men, sure, but I was — and still am — pretty vanilla. I've never used a whip in the boudoir in my life. Or, have I? Hang on, let me think for a minute…"

In 1998, Halford became the first metal icon to announce he is gay during an MTV interview, despite knowing about his sexuality since he was 10.