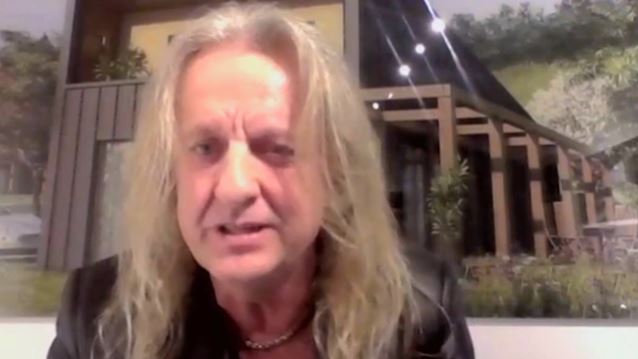 Former JUDAS PRIEST guitarist K.K. Downing was interviewed on the latest episode of VH1 Classic's "That Metal Show" via the "Metal Modem" segment.

Asked what he has been up to since he left PRIEST in 2011, Downing said: "I've appeared a couple of albums — just did a couple of solos. It didn't work out great, but… Other than that, I've been helping a couple of local bands, giving them a leg up. And, you know, just keeping my finger on the pulse, playing a bit of guitar and stuff. Essentially getting my whole life together after so long. Getting to see the seasons change in the U.K., for once. And, you know, checking in on the family, and just checking in on my own life, really."

He continued: "It's been good. People say, 'Oh, do you miss it? Do you miss it?' But it just seems like yesterday that I stepped off that stage in Japan in 2011. Time goes by pretty quick, you know. You get to a certain age and it goes by very, very quickly."

Asked if he is still on good terms with his former bandmates, Downing said: "Yeah, pretty much. I mean, those guys have been pretty busy, actually, since I left the band."

He added: "Obviously, I'm glad that the PRIEST machine is still rolling, because it would be hard to imagine a world without a PRIEST. And I think that that's good, and it's good for the fans. And I'm glad Richie [Faulkner, Downing's replacement] has taken up the baton and has allowed the band to carry on, and all that."

Downing also revealed that he has heard "most" of PRIEST's latest album, last year's "Redeemer Of Souls", which marked the band's first studio release without him. He said: "I can't say I heard the whole thing in its entirety yet, but when I get around to it, I will do that, for sure."

Downing, who is a founding member of the British heavy metal legends and was part of the group since 1969, announced his retirement from PRIEST in April 2011.

K.K. in 2011 shot down as "inaccurate" reports that he left JUDAS PRIEST because he chose to concentrate on running the 18- and nine-hole golf courses on his property.