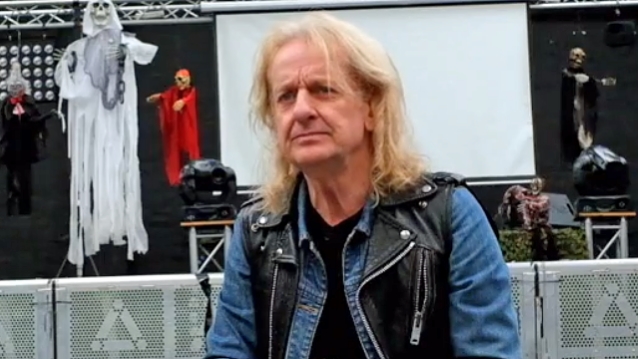 Steve Goldby of Metal Talk recently conducted an interview with former JUDAS PRIEST guitarist K.K. Downing. You can now watch the chat in four parts below.

Asked if he thinks some publications have used things he has said in some of his recent interviews to make "overly sensationalist headlines," K.K. responded: "Oh, yeah. It absolutely happens. And I have to take that onboard as well. When I get a bit miffed off about what the guys say — like the guys in the band, [when] they're doing interviews. And like I say, I'll get frustrated sometimes from a fan's point of view. 'Cause when they see something on a publication, whether it's Metal Talk or Blabbermouth… It's usually probably Blabbermouth; they'll say something that you said, change a couple of words… Don't get me wrong — we're all glad… we all go to the web sites, because it keeps us informed. It's just a bit misleadling sometimes."

He continued: "I must say it again… Fans, when you hear a headline, it's not me calling up Blabbermouth and saying, 'Hey, I wanna say this…' I'm just casually… Like we are today, we're in a casual interview, but sometimes something gets printed or recorded and it's picked up, a couple of words changed. It's just like a caricature, and we all hate them, don't we? If people do a character [where certain striking characteristics are exaggerated in order to create a comic or grotesque effect] — whether it's your nose or your ears or your eyebrows or something — all those features jump out, and that's kind of what some publications can do with words, and make them sound a bit more ugly than they actually are."

Despite this, Downing doesn't regret having made any of the statements that have been attributed to him. "I'm happy with everything I say — it's just that, like I say, if it gets contorted slightly just in the words," he said. "So when Ian [Hill, PRIEST bassist supposedly] said [in some of his interviews], 'None of the fans are missing K.K.,' I have to bear this in mind, 'cause I think, 'Ian, you could have said, 'Not all of the fans are missing K.K.' But, anyway, I have to take that onboard, so I encourage everybody to do the same thing."

K.K., who is a founding member of the British heavy metal legends and was part of the group since 1969, announced his retirement from PRIEST in April 2011. He has since been replaced by Richie Faulkner, who was once the guitarist in the backing group for Lauren Harris, daughter of IRON MAIDEN bassist Steve Harris.

K.K. is promoting his autobiography, "Heavy Duty: Days And Nights In Judas Priest", which was released on September 18 via Da Capo Press. The book was co-written by the Scottish author and journalist Mark Eglinton, whose previous collaborations include "Official Truth, 101 Proof" with Rex Brown of PANTERA and "Confessions Of A Heretic" with BEHEMOTH's Adam "Nergal" Darski.