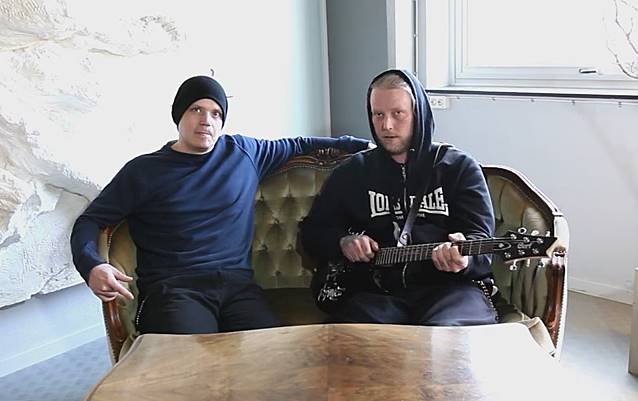 Rocksverige.se spent a day with THE RESISTANCE before, during and after the band's April 13 concert in Gothenburg, Sweden. Check out the footage below.

THE RESISTANCE's full-length debut, "Scars", was released on May 10, 2013 in Europe and May 14, 2013 in the U.S. via earMUSIC, the Hamburg, Germany-based international rock label which is part of Edel Group. The 12-track CD is reminiscent of the good old days of Swedish death metal back in the 1980s/1990s when bands like ENTOMBED, GRAVE and DISMEMBER proved how insanely brutal and relentless, yet immensely captivating and technically adept extreme music can be. Well, apparently some established Swedish musicians did miss them, so they put things right: They brought back the old Swedish death metal.

"If you listen to ENTOMBED's 'Left Hand Path' today, it still blows everything away. And it's over 20 years old," says THE RESISTANCE/ex-IN FLAMES guitarist Jesper Strömblad. "[It's] just awesome death metal!"

THE RESISTANCE released its debut EP, "Rise From Treason", in North America on January 29, 2013 via earMUSIC. The EP was made available on CD, limited-edition seven-inch vinyl and as a digital download.

The song "Eye For An Eye" was originally made available on the sampler CD that was distributed to the subscribers of Sweden's Close-Up Magazine in the August 2011 issue.

THE RESISTANCE's lineup is as follows: