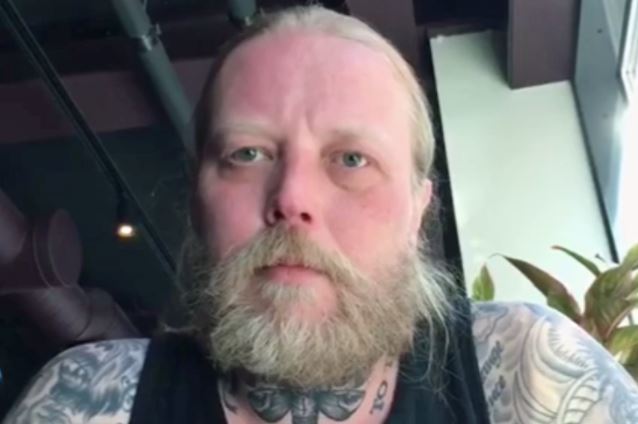 Ex-IN FLAMES guitarist Jesper Strömblad has slammed his former bandmates, saying that he is "happy" that he "left the sinking ship."

Strömblad, who quit IN FLAMES in February 2010 in order to continue receiving treatment for his alcohol addiction, made his latest comments in response to a 2014 interview with IN FLAMES members Anders Fridén (vocals), Björn Gelotte (guitar). In that video interview, which was conducted by Germany's Rock Hard magazine, Anders was asked what the songwriting process has been like for IN FLAMES now that there are only two main writers involved instead of three. Anders responded: "Both me and Björn complete each other really well these days. I know him, he knows me. And, yeah, it's a slightly different process being two songwriters than three, but I think it makes it… Maybe before there was more compromises. Today there's no compromises, 'cause [Björn has] gotta be happy and I've gotta be happy. Otherwise it's not getting done. We both need to agree that this is the best song ever until we write the next 'best song ever,' so to speak, and then continue."

Earlier today (Tuesday, September 13), Jesper took to his personal Facebook page to post a link to the Rock Hard interview and to add the following comment: "Anders says as it is breaking news. He [has] never been a songwriter. Trying to 'sing' with a vocal producer doing his best to polish the turd. And most importantly, I had no impact on the songwriting whatsoever *crying*... Sorry guys, I just could be quiet for once. Just happy I left the sinking ship."

After leaving IN FLAMES, Strömblad formed THE RESISTANCE with Marco Aro (vocals, THE HAUNTED) and Glenn Ljungström (guitar, ex-IN FLAMES). Strömblad announced his departure from that group in March of this year, with the band's bassist, Rob Hakemo, saying in an interview that Jesper "saved" THE RESISTANCE by quitting and explaining that the guitarist is "an alcoholic" and "drug addict" who "doesn't want to [get] sober." Rob added: "[Jesper] thinks that two weeks [sober] is good, and then he can drink some. And then he's gone for a month, and then he's back and he's not drinking [for a short while]. It's a sad thing, and we really tried to help him and wanted the best [for him]. So when he told us that 'I'm leaving the band,' we were relieved. We were really relieved."

"Battles", IN FLAMES' twelfth studio album — and its third since Jesper's departure — will be released on November 11 via Nuclear Blast in all territories excluding North America and Scandinavia and Eleven Seven Music Group in the U.S. 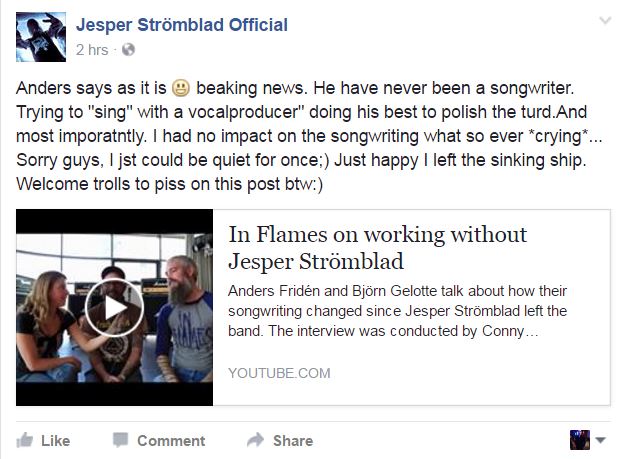