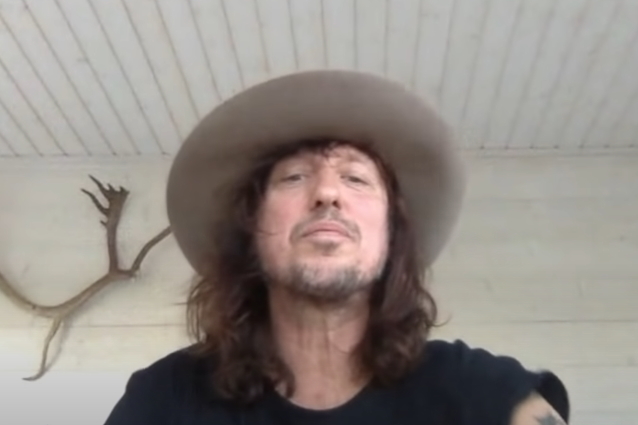 During a recent interview with Waste Some Time With Jason Green, former HANOI ROCKS bassist Sami Yaffa discussed spending time with HANOI drummer Nicholas "Razzle" Dingley and MÖTLEY CRÜE singer Vince Neil on the day of the tragic car accident caused by Neil in December 1984 that killed Razzle, who was Vince's passenger.

"Vince came to pick up me and Razzle," Sami said (as transcribed by BLABBERMOUTH.NET). "We stayed at the Franklin Plaza Suites, or something like that, at LaBrea and Franklin. 'Cause Razzle and Vince were buddies, so he was going to pick up Razzle and show him around L.A. and all this stuff. And Razzle was, like, 'Sami, come along.' And he came with a tiny little sports car — it wasn't that car that ended up in an accident; it was another one; but [it was] a two-seater — and there was no room. And Razzle was just, like, 'Oh, fuck it, mate. Just hop on my fucking lap.' So it was three of us just cruising around L.A. And he showed us Santa Monica and Hollywood Boulevard and we drove all around L.A. And he was showing us places: 'There's The Troubadour' and 'There's the Rainbow' and 'There's Roxy' and 'There's the Whisky.' So we had a really nice afternoon with Vince. And then he said, 'Let's just go back to my house and my wife will cook some lunch, or whatever, and some dinner, and we'll hang out.' And that's what we ended up doing — we ended up hanging out, having some beers and smoke a little spliff and have a good time and talk about things. And little by little, it just turned into more of a party. But it wasn't really like a crazy party; it was just a bunch of people showed up. Andy [McCoy, HANOI guitarist] and Tommy [Lee, CRÜE drummer] came a little bit later and some of their friends. And we'd been kind of drinking beer all day. And I just said that I'm gonna take a nap. They actually asked me to go with them to go and pick up some more beer. And I said, 'I'm gonna take a nap.' And when I woke up, Mick Mars [CRÜE guitarist] was just kind of shaking me awake. And I wondered where everybody else was. And he said that there's been an accident. And we went to the hospital and I found out that my bro was gone. It was very heavy."

Neil's drunk-driving death car crash happened when he smashed his car into another vehicle in Redondo Beach, California, killing Razzle and seriously injuring two other occupants.

Vince was charged with vehicular manslaughter and driving under the influence of alcohol. His blood alcohol level was 0.17, which was over the legal limit.

Two years ago, former HANOI ROCKS singer Michael Monroe told "The Classic Metal Show" that he was "not interested at all" in seeing MÖTLEY CRÜE's "The Dirt" biopic. Monroe went on to say that the car accident "certainly destroyed a lot of people's lives. I've never blamed anybody — you can't blame anybody for an accident — but a lot of people's lives were shattered, "he said. "As well as the two teenagers who got paralyzed in the accident; I've heard that there was no mention of them either [in the film].

"It's a depressing subject and it's always like opening a can of worms," Michael continued. "And I just don't wanna get into all that. It's just useless."

Back in 2004, Monroe slammed MÖTLEY CRÜE for the band's decision to title a box set "Music To Crash Your Car To", calling the move beyond disrespectful and referring to the group's bassist Nikki Sixx as "shallow," "ignorant" and "stupid". "The 'Mostly Crude' gotta be as dumb as they are to have done that," he told Metal Sludge. "I'm not only talking about Razzle, but also for the other families involved in the accident... As we've previously stated: The most tasteless and murderous gimmick to cash in on the past we've ever heard of. There's nothing 'cool' or 'funny' about death or winding up a paraplegic for life. How low can you go? I'd say this gave bad taste a bad name."

Three years later, Monroe publicly apologized to Sixx, saying that his "unflattering comments" about the bassist were "really childish and stupid." He explained: "I just took it a bit personally when they called their album at the time 'Music to Crash Your Car To'. I thought it was inappropriate since it came across as if they were making fun of the accident, which I'm sure was not their intention."

In 2011, Monroe gave Sleaze Roxx his take on what happened that night: "There was an accident, and unfortunately our drummer was killed. As far as Vince Neil, I have nothing to say. It was an accident. What happened happened, and it can't be changed. Everybody suffered from the whole thing."

In 2005, McCoy slammed MÖTLEY CRÜE over their account of Razzle's death and CRÜE bassist Nikki Sixx's heroin overdose, as published in CRÜE's best-selling band autobiography, "The Dirt: Confessions of the World's Most Notorious Rock Band". Asked by Norway's Metal Express to comment on the book's description of the events surrounding the accident that killed Razzle, McCoy said, "Bullshit. Pure lies. I was there. What happened was Razzle disappeared, and so did Vince. The rest of us were chilling out, man. And he had a wife who was seven months pregnant. After an hour or so, she started getting worried. So me and T-Bone, Tommy Lee [MÖTLEY CRÜE drummer], took his car and we went looking for him. We drove past this accident. So I was like, 'What color was the car he was driving around?' 'Hey, man, we just passed the fucking scene of an accident with a bright red sports car all smashed up.' I saw Razzle's hat on the street, I went up, 'What the fuck's happened?' They said, 'You have to go to this and this hospital.' In the hospital, I walk in with Tommy, and I was asking about Razzle, and this doctor walks up, 'Anybody here know this guy called Razzle?' I said, 'Yeah, I do, his family.' 'Sorry, your friend has passed away.' I thought he might have a broken leg or something. I had to call the band, and you don't tell this kind of news over the telephone. I asked them to come to the hospital. And it was a pretty sad scene altogether."

HANOI ROCKS originally broke on to the hard rock scene in the first half of the 1980s, becoming one of the first Finnish bands to make an international impact. HANOI ROCKS's career was subsequently derailed after the death of Razzle. Internal tensions and the commercial disappointment that was 1985's "Rock & Roll Divorce" led to Monroe leaving the band that year, thus putting an early end to HANOI ROCKS.